From The Texas Tribune: Outspoken Education Board Candidate Headed to Runoff 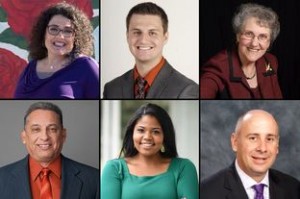 An East Texas Republican who once claimed President Obama used to be a gay prostitute appears headed for a May 24 primary runoff in the race to represent District 9 on the State Board of Education. And at least one political scientist believes Mary Lou Bruner could fare even better there than she did on Tuesday. The 68-year-old retired schoolteacher, who garnered national attention during the campaign because of her over-the-top Facebook posts, was near the 50 percent mark early Wednesday morning in her three-person GOP primary race. She appears poised for a runoff with Lufkin chiropractor and school board president Keven Ellis, who raised and spent more money than Bruner during the campaign but trailed her by 17 percentage points with 95 percent of precincts reporting. (Bruner had secured about 48 percent of the vote to Ellis' 31 percent.) The third candidate in the race, Hank Hering, a friend of Bruner’s, was running third early Wednesday morning. (Bruner told the Tribune she would’ve endorsed Hering in the race if she hadn’t run.) While runoffs can be toss-ups regardless of what happens in the regular election, Rice University political scientist Mark Jones said Bruner will probably have an edge in May because the movement conservatives backing her are more likely to show up to vote than the more moderate Republicans who are backing Ellis. Ellis describes himself as a conservative Republican, but — with endorsements from Republicans like outgoing House Public Education Chairman Jimmie Don Aycock of Killeen — was seen as the establishment candidate in the race. That has been a difficult label to overcome for candidates up and down the ballot this election cycle with voters showing overwhelmingly preference for outside-the-box over run-of-the-mill. If Bruner clinches the party nomination, it all but ensures she will win in November, as District 9 is considered safe for Republicans. Whoever prevails in the District 9 GOP primary race will face Democrat Amanda Rudolph, a secondary education professor at Sam Houston State University who is unopposed in her primary. Observers say her election would reignite the divisiveness on the 15-member education board, which is in charge of crafting curriculum and textbooks for the state’s more than 5 million public schoolchildren. The panel has become more harmonious in recent years as the cadre of fervent right-wing conservative conservatives who used to dominate the board has diminished, with some members retiring or being voted out. One of those members lost to the current District 9 representative, Thomas Ratliff of Mount Pleasant, one of the board's more moderate Republican members who decided not to seek re-election. Observers also have predicted an increase in divisiveness if Democrat Georgina Perez represents District 1 on the education board, which she will after her primary win Tuesday. Perez, 41, avoided a runoff in the three-person primary race. Finishing behind her were Joe Fierro Jr., a longtime Army soldier, and Lynn Oliver, a retired public school teacher who now lectures in the Department of English at the University of Texas at San Antonio. There is no Republican running for District 1. In District 6, Democrats Jasmine L. Jenkins and R. Dakota Carter are headed for a runoff. Carter, 28, is a child and adolescent psychiatry resident at the University of Texas Health Science Center in Houston. Jenkins, 32, is a former bilingual fourth-grade teacher who now works for a tutoring and test preparation company in Houston. Whoever prevails will face Republican board chairwoman Donna Bahorich in November. She has no primary opponent. Neither do five other board members up for re-election — Tom Maynard, Barbara Cargill, Marty Rowley, Sue Melton-Malone and Ken Mercer — although some will face Libertarian and Green Party challengers in November. Disclosure: Rice University has been a corporate sponsor of The Texas Tribune. A complete list of Tribune donors and sponsors can be viewed here.

This article originally appeared in The Texas Tribune at https://www.texastribune.org/2016/03/01/state-board-races-head-to-runoff/.