From The Texas Tribune: Amid STAAR Upheaval, Panel Working on Fixes 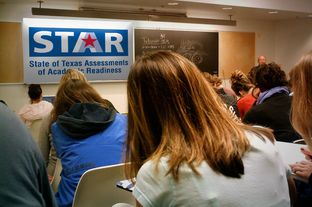 As displeasure with Texas’ standardized testing regime mounts, all eyes are on a special panel the Legislature created last year to figure out whether to scrap the widely reviled STAAR exam.

The 15-member Commission on Next Generation Assessments and Accountability, scheduled for its second-to-last meeting Monday, has been studying alternatives to the high-stakes tests, which state law requires 5th and 8th graders and high schoolers to pass to move to the next grade level or to graduate. The panel includes a diverse mix of educators, elected officials, business leaders and anti-testing activists.

Its work couldn’t be better timed, with parents and school officials up in arms over wide-ranging problems reported with this spring’s STAAR administration — issues that prompted Education Commissioner Mike Morath on Friday to waive the requirement that 5th and 8th pass the tests to move on to the next grade. The panel first convened in January, the month after Congress passed a new federal law giving states far more freedom to determine what their testing and accountability systems should look like. And many educators, parents and elected officials agree that major overhauls are necessary, even if they don’t entirely agree on what they should be.

Commission members have expressed high hopes for devising meaningful changes to a system that assesses students and holds them and schools accountable. Many view that system as unnecessarily stressful, overly punitive and developmentally inappropriate. Their recommendations are due to Gov. Greg Abbott and the Legislature by Sept. 1.

“I really am excited about the potential for this,” said commission member and Senate Education Committee Chairman Larry Taylor, R-Friendswood, in an interview ahead of the panel’s April meeting. “It’s really a varied group with a lot of different experiences and backgrounds on there, and it’s what I had envisioned as far as having a meaningful dialogue of stakeholders that bring their own perspectives to it and try to come up with some type of consensus.”

Teacher, school and parent groups also have been excited by the opportunity to make big changes. But some say their hope for revolutionary reform has waned over the months — particularly after the panel’s May meeting, when members struggled to hammer out a list of recommendations. Several panelists said it will be crucial to make progress at Monday's meeting, as they are set to finalize their guidance at a meeting in July.

Monty Exter, a lobbyist for the Association of Texas Professional Educators, said it quickly became clear after the panel’s first monthly meeting that it was not looking to eliminate statewide testing and that it would likely keep STAAR, or something like it, in the lower grades.

“I do think they will reach consensus around some areas,” he said. “I don’t think that it’s probably going to be groundbreaking.”

The federal government has required states to assess students in grades 3 through 8 annually and once in high school since the enactment of the No Child Left Behind Act in 2002 — at least if they want to receive federal funding. Many other states are also tinkering with their testing plans amid pressure from parents to reduce testing time and make the overall experience less taxing.

The commission has coalesced around some larger concepts, such as the importance of accounting for improvement in student scores; that exams should be more developmentally appropriate and diagnostic rather than summative; and that there should be multiple different measures of student performance with consequences for poor outcomes falling more heavily on teachers and administrators than on students. But they have struggled with specifics, getting hung up on recommendations that would cost districts a lot of time or money or pose other problems.

Scott Placek, an Austin-area lawyer representing a group of parents who recently sued the state over STAAR, said they are concerned by the interest panelists have expressed in having a series of smaller assessments throughout the year rather than one big, end-of-year exam. (Education Commissioner Mike Morath also has expressed support for the concept.)

“Some of the things that have been discussed in terms of more continual assessment, more data-driven assessment, you know, it’s concerning to parents who I think believe the system is already too data-driven,” said Placek, adding that his own son struggled with STAAR.

“I think that parents were initially very supportive of the idea of re-examining assessment,” he added. “I think as the work of the commission has gone on, that’s sort of shifted to caution and suspicion.”

Comal ISD Superintendent Andrew Kim, the panel’s chairman, said he's tried to remind the panel that many of the things under discussion — including smaller, diagnostic assessments throughout the year — have been tried and rejected before.

"This is a very complex topic," he said. "There's not, in my opinion, one silver-bullet solution that’s going to meet the needs of various constituents out there in our state, and ... it probably merits further discussion going forward even beyond the commission." He also said that there's a desire among educators to not “throw the baby out with the bathwater” or risk overcorrecting the problem.

Taylor, too, said he’s “not huge on reinventing the wheel." Still, he foresees a potentially “massive” impact from the commission's work, including possibly getting rid of the five end-of-course exams high schoolers are supposed to pass before they can graduate and instead using an exam like the SAT or ACT. Nearly half of all states now require students to take either of these two college entrance exams in lieu of, or in addition to, some other type of test, according to a 2015-16 Education Week survey.

“I don’t want this to just be an exercise of what ifs,” Taylor said.

Panel member Theresa Treviño, president of the influential anti-testing group Texans Advocating For Meaningful Student Assessment, said the recommendations the panel will make “are probably not as grand as I would have hoped” but that she still thinks they will make an impact.

“I think it’s going to be more than a tweak, which is what I was really afraid of,” she said. “I’m hoping that with this next meeting we can sit down and hammer out those recommendations that could make a bigger difference and they don’t have to be huge.”

Commission member and outgoing House Public Education Committee Chairman Jimmie Don Aycock, R-Killeen, said striking an appropriate balance has been challenging but that he thinks the commission will produce recommendations to "get rid of some of the craziness" that has created such a stressful testing environment, including some high-stakes provisions.

Even if the panel does recommend big changes, some teacher and school groups worry they may fall victim to House-Senate gridlock next year, with leadership already publicly butting heads over public education priorities.

"The work of the commission will have a challenging road ahead of it in the 85th session," said education lobbyist David Anderson.

“There's not, in my opinion, one silver-bullet solution that’s going to meet the needs of various constituents out there in our state, and ... it probably merits further discussion going forward even beyond the commission.”— Andrew Kim, Comal ISD and panel chairman

Amy Beneski, a lobbyist for the Texas Association of School Administrators, said that even if the recommended changes are smaller, they still could make a huge difference.

“The bottom line is, the majority of people I’ve ever talked to aren’t happy with the current system, and that’s not going to change,” she said. “We’re just going to have to keep plugging away. This is hard work.”
Disclosure: The Association of Texas Professional Educators and the Texas Association of School Administrators have been financial supporters of The Texas Tribune. A complete list of Tribune donors and sponsors can be viewed here.
This article originally appeared in The Texas Tribune at https://www.texastribune.org/2016/06/11/amid-staar-upheaval-panel-working-fixes/.
Previous
Next