Did you enjoy this shortened work week? Here's a recap of this week's top Texas education news.

The State Board of Education (SBOE) met Wednesday through Friday of this week. ATPE Lobbyist Monty Exter attended the meetings and provided an update for Teach the Vote earlier today. Among topics discussed by the board were the length of STAAR tests, how graduation rates are calculated, and funding a long-range education plan. As we have reported on Teach the Vote, the State Board for Educator Certification (SBEC) is considering changing its rules for becoming certified as a superintendent in Texas. The proposal would eliminate requirements for graduate degrees and prior experience as a teacher and principal. We encourage ATPE members concerned about the controversial proposal to submit written comments to SBEC now through Oct. 5. Click here for instructions on how to submit your comments via e-mail. 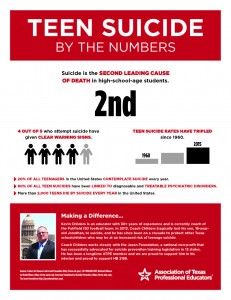 National Suicide Prevention Week has been observed this week. Many Texas public schools marked the occasion with training programs, and several ATPE representatives spoke to the media about renewed efforts to help prevent suicide among schoolchildren. Earlier this year, ATPE worked successfully to pass House Bill 2186 by Rep. Byron Cook (R-Corsicana), which aims to help educators become trained to spot and react to the warning signs of suicide in students. We asked Rep. Cook to carry the bill on behalf of one of our members, Coach Kevin Childers from Fairfield ISD. Coach Childers lost his teenage son Jonathan to suicide in 2013, and their family's story was featured in a recent issue of ATPE News. The new law that ATPE lobbied to pass this year is officially called the Jason Flatt Act, in memory of Jonathan Childers. With suicide as the second leading cause of death for teens, prevention and education are critically important. Click on our infographic above to learn more about the teen suicide epidemic and our efforts to stop it. For additional coverage of National Suicide Prevention Week, watch News 4 San Antonio's interview with Kevin Childers; KGBT's story on McAllen High School's #youmatter suicide prevention initiative this week; KXXV's report on the new training requirements for educators featuring ATPE Media Relations Coordinator Stephanie Jacksis; KWTX's article featuring ATPE Region 12 Director Jason Forbis talking about how educators can help spot those warning signs; and this week's post on Inquisitr.com featuring ATPE Executive Director Gary Godsey also discussing prevention of teen suicide. Additionally, click here to read ATPE Lobbyist Josh Sanderson's post about TEA guidance recently issued for implementation of the new suicide prevention training law. For additional resources to #stopsuicide, please visit the American Foundation for Suicide Prevention or the  American Association of Suicidology. Finally, here are a few more highlights you may have missed this week from Teach the Vote and ATPE on social media: 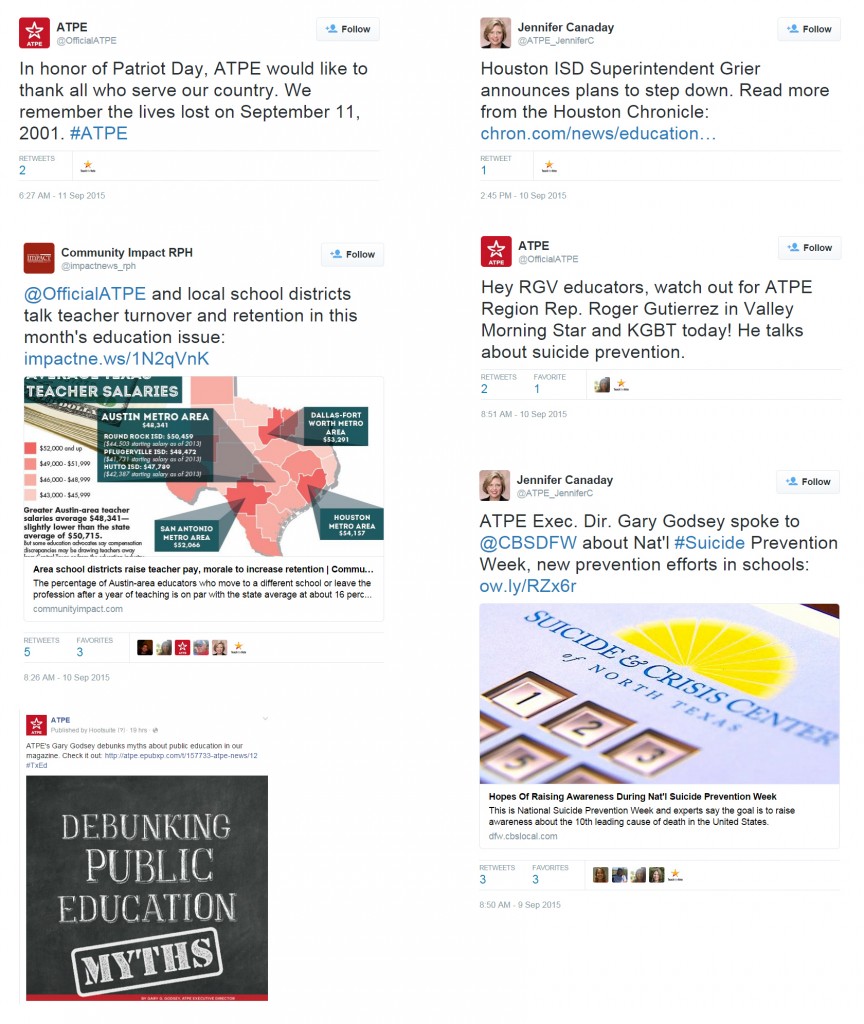