NCTQ's new report on teacher preparation: What does it mean for Texas?

The National Council on Teacher Quality has released its 2014 "Teacher Prep Review," a private study analyzing the effectiveness of many educator preparation programs around the country. 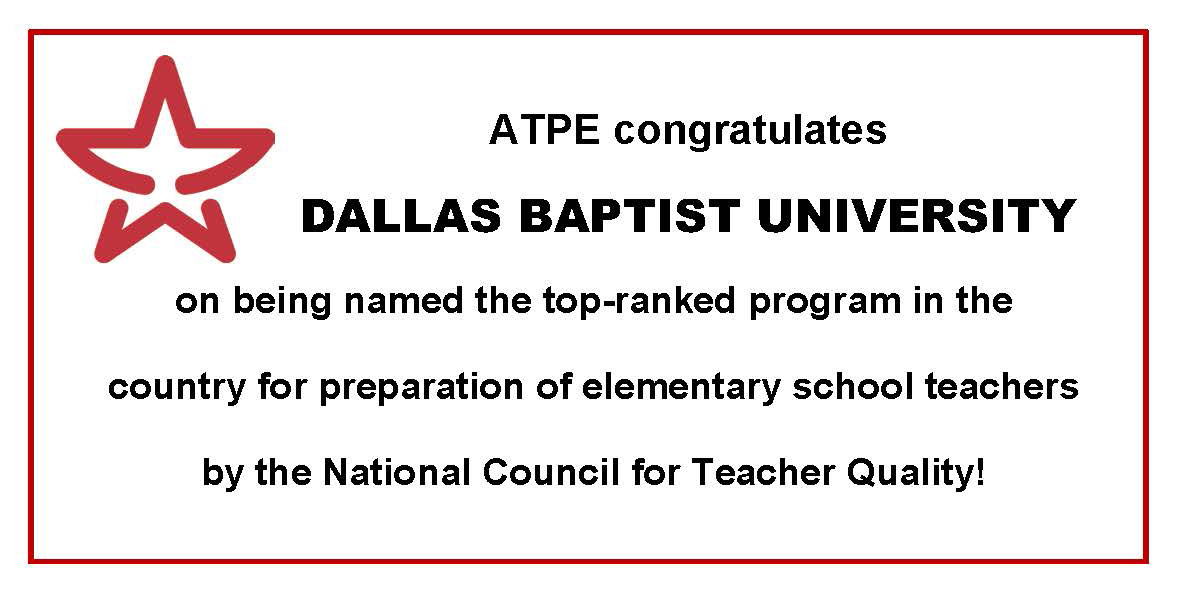 NCTQ named Dallas Baptist University as its top-ranked program in the nation for preparing elementary school teachers. (Utah-based Western Governors University was the top performer for preparation of secondary school teachers.) The report stated, "The commitment and focus on the part of these institutions, and indeed all of the institutions with Top Ranked programs, serves as a tremendous source of optimism that it is possible for all new teachers to receive the preparation needed to be classroom ready on day one." This year's report studied 836 programs, including both traditional university-based educator preparation programs and alternative certification programs (ACPs). NCTQ was highly critical of alternative certification programs, especially in Texas. The report noted that Texas is the only state that allows for-profit entities to operate alternative certification programs. Of all the ACPs evaluated for the report, only one out of 85 programs around the country received an "A" grade from NCTQ; most were graded with a "D" or "F" this year. In reviews of traditional ed prep programs, Texas universities fared better. Texas was one of three states with the most top-ranked programs according to the NCTQ study of traditional educator preparation programs. Dallas Baptist University and the University of Houston were recognized for having high-quality programs in both the elementary and secondary teacher preparation categories. Texas A&M University, the University of Houston and Texas A&M University-Corpus Christi earned praise for having high-ranking ed prep programs that also offer affordable tuition. 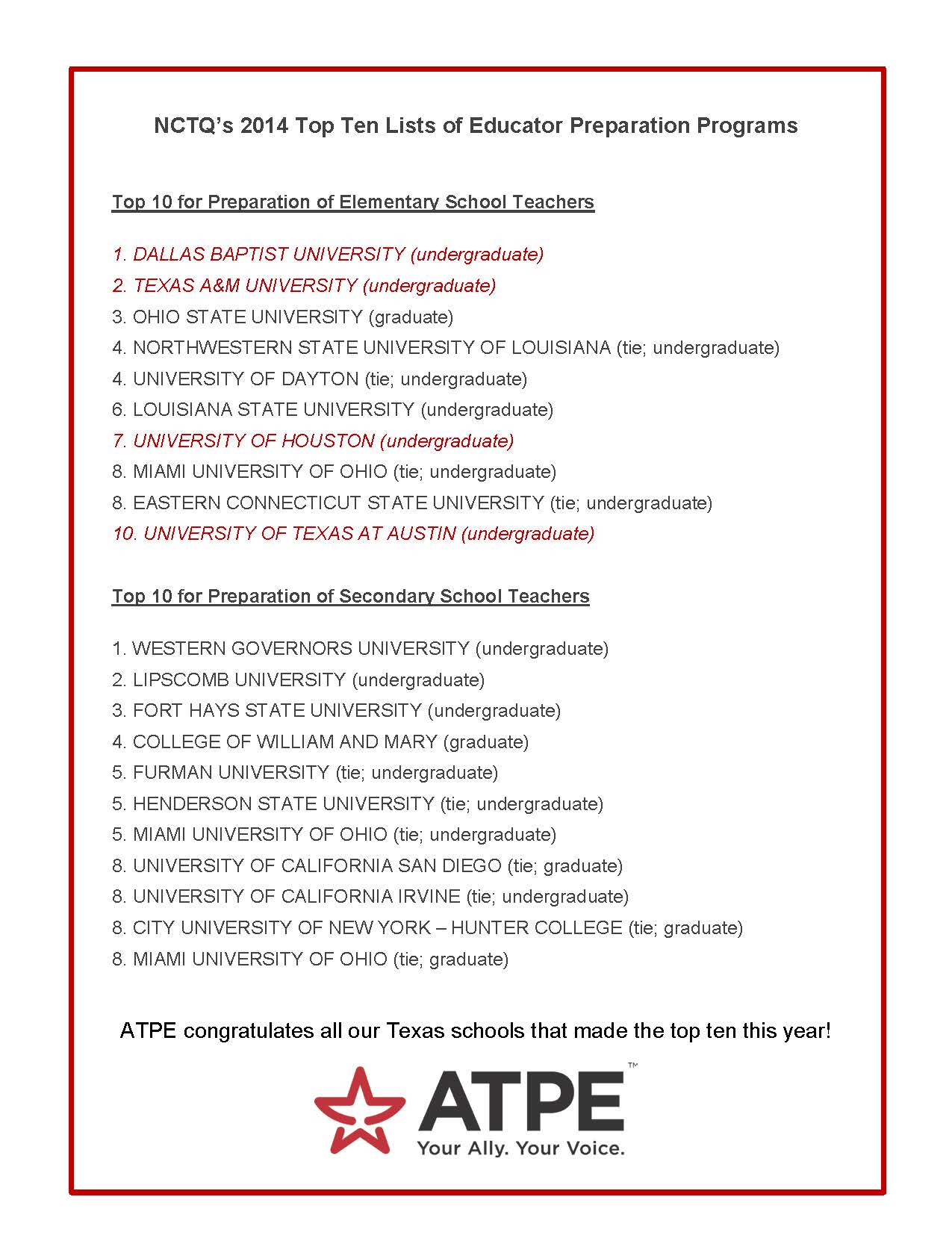 NCTQ observed that in recent years, raising the standards for educator preparation "had been largely sidelined as an issue, even though the broader issue of teacher quality had been the 'hot' topic in education reform for much of the decade." The organization believes more states are starting to adopt positive changes now. For example, the report recognized Texas as one of 19 states that improved its testing of content knowledge for teacher certification candidates by requiring separate passing scores in each core subject covered by the test. ATPE spent several years advocating for precisely this change, and legislation was finally passed in 2013 to require candidates to demonstrate proficiency in each core subject level on the certification exam for multi-subject certificates. According to NCTQ, not a single state had such a requirement when it conducted its first review of ed prep programs in 2009. There is still more work to be done. NCTQ found that only five percent of the ed prep programs studied nationwide met the organization's standard for student teaching by ensuring that student teachers receive strong support. The University of Houston was recognized as a standout in this area, however, for its strong student teaching program. Other findings excerpted from the national study lend support to ATPE's ongoing advocacy efforts to raise the prestige of the education profession through more selective recruitment. The report concluded, "Three out of four programs fail even to insist that applicants be in the top half of the college-going population, a modest academic standard," and "four out of five teacher preparation programs are weak or even failing." One way ATPE has worked to increase the selectivity of the profession is by urging the state to impose higher minimum GPA requirements for entrance into an educator preparation program. Texas has only required a minimum 2.5 GPA, or a 2.5 GPA in the last 60 hours of college coursework, and it has also granted programs the ability to exempt up to 10 percent of each cohort entering their program from the minimum GPA requirement. ATPE recently succeeded in convincing the State Board for Educator Certification to raise Texas' minimum GPA requirement for ed prep candidates from 2.5 to 2.75; that rule is still pending and will be up for final adoption in August, and it was mentioned in the NCTQ report. The GPA issue is extremely important in the context of alternative certification where candidates need a certain level of expertise before entering the certification program, especially since they are placed into classrooms as teachers of record almost immediately. As NCTQ explained in its report, alternative certification was designed to provide a convenient way to put qualified individuals with subject-matter expertise into the classroom without requiring them to obtain another degree. To function ideally, NCTQ added that ACPs must provide intensive mentoring and monitoring of their candidates and impose high admission standards, especially making sure that the candidates have strong content knowledge before they ever enter the certification program. The findings on ACPs studied by NCTQ, most of which were located in Texas, were dismal: "Alternative certification programs are not requiring that candidates demonstrate content proficiency before entering the classroom, or they use inadequate tests for that demonstration. They also do not supplement testing with transcript reviews. Only 16 percent of programs ensure that candidates 'know their stuff.' ...By every measure, training and coaching offered to alternatively trained candidates is inadequate." "What accounts for the low grades in Texas?" NCTQ went on to ask. The report answered, "Clearly state regulations play a large role." While ed prep programs always have the ability to adopt admission standards that are higher than the minimum standards required by state law, for-profit ACPs have a vested interest in keeping their standards as low as possible in order to admit more candidates and maximize profits. That is exactly why ATPE has lobbied for raising the state standards, such as the minimum GPA requirement. Not surprisingly, requiring only a minimum 2.5 GPA was one of the specific criteria NCTQ used in assigned "F" grades to the ACPs it studied for this report. Among the Texas entities receiving  "F" grades in the report were the state's top two producers of new teachers in Texas, both of which are for-profit ACPs (A+ Texas Teachers and iTeach Texas).

ATPE supports alternative routes to certification, which have become the most common pathway to the teaching profession in Texas in recent years. A growing number of our members hail from ACPs, and many have been very successful. However, as highlighted in this most recent report, the ACPs that are producing most of our state's new teachers appear to be short-changing their graduates, leaving too many of them poorly supported and ill-prepared or to face the rigors of the classroom. Our teachers deserve the best, whether they choose traditional or alternative means of entering the profession. Teaching is a difficult and sometimes thankless job, and we owe it to our teachers to support them, especially in their first years on the job. ATPE believes that raising the standards across-the-board for teacher preparation in Texas will have a positive ripple effect on the profession, leading to more support for new teachers, increased prestige for the profession, better pay and job satisfaction for teachers and decreased vulnerability to questionable education reform tactics aiming to improve teacher quality by focusing heavily on student outcomes (using standardized test scores, for example). As we have repeatedly said, inputs matter as much as, if not more than, outputs in the equation for public education success. NCTQ's private study is not all-inclusive, and its methodology is hardly foolproof. We know there are some who question the basis for the organization's rankings of university programs as well as its harsh assessment of individual ACPs. While there is certainly more data that could be collected and analyzed, we believe the report does highlight major policy issues that deserve more scrutiny in the area of educator preparation, especially with regard to alternative pathways to teaching. ATPE's interest in raising the standards for entrance into the profession is motivated by our desire to ensure that all teachers are well-supported, that they receive the tools and training they need for success before they take charge of a classroom for the first time and that the profession is selective enough to be deemed worthy of professional compensation and respect by those who enact education laws and policies. As described by NCTQ, "Today’s model of teacher preparation leads to widespread dissatisfaction from public school educators, aggravates the poor regard in which the field is held, and, as a consequence, ramps up interference by outsiders." Among NCTQ's specific recommendations for policy changes needed in Texas: "Require rigorous teacher prep program admission tests. Teacher prep programs should screen candidates for academic proficiency before admission by requiring that they earn a score in the top half of the general college-bound population on a test that is designed for that population (like the ACT, SAT or GRE). The Praxis I and similar tests designed only for teacher candidates generally assess skills at the 8th-10th grade level and are inadequate as admission tests." Read the full NCTQ Teacher Prep Review here.
Previous
Next