"The Myth Behind Public School Failure" from YES! Magazine

In the rush to privatize the country’s schools, corporations and politicians have decimated school budgets, replaced teaching with standardized testing, and placed the blame on teachers and students.

by Dean Paton YES! Magazine, Spring 2014 Until about 1980, America’s public schoolteachers were iconic everyday heroes painted with a kind of Norman Rockwell patina—generally respected because they helped most kids learn to read, write and successfully join society. Such teachers made possible at least the idea of a vibrant democracy. Since then, what a turnaround: We’re now told, relentlessly, that bad-apple schoolteachers have wrecked K-12 education; that their unions keep legions of incompetent educators in classrooms; that part of the solution is more private charter schools; and that teachers as well as entire schools lack accountability, which can best be remedied by more and more standardized “bubble” tests. What led to such an ignoble fall for teachers and schools? Did public education really become so irreversibly terrible in three decades? Is there so little that’s redeemable in today’s schoolhouses? The beginning of “reform” To truly understand how we came to believe our educational system is broken, we need a history lesson. Rewind to 1980—when Milton Friedman, the high priest of laissez-faire economics, partnered with PBS to produce a ten-part television series called Free to Choose. He devoted one episode to the idea of school vouchers, a plan to allow families what amounted to publicly funded scholarships so their children could leave the public schools and attend private ones. You could make a strong argument that the current campaign against public schools started with that single TV episode. To make the case for vouchers, free-market conservatives, corporate strategists, and opportunistic politicians looked for any way to build a myth that public schools were failing, that teachers (and of course their unions) were at fault, and that the cure was vouchers and privatization. Jonathan Kozol, the author and tireless advocate for public schools, called vouchers the “single worst, most dangerous idea to have entered education discourse in my adult life.” Armed with Friedman’s ideas, President Reagan began calling for vouchers. In 1983, his National Commission on Excellence in Education issued “A Nation At Risk,” a report that declared, “the educational foundations of our society are presently being eroded by a rising tide of mediocrity that threatens our very future as a Nation and a people.” It also said, “If an unfriendly foreign power had attempted to impose on America the mediocre educational performance that exists today, we might well have viewed it as an act of war.” For a document that’s had such lasting impact, “A Nation At Risk” is remarkably free of facts and solid data. Not so the Sandia Report, a little-known follow-up study commissioned by Admiral James Watkins, Reagan’s secretary of energy; it discovered that the falling test scores which caused such an uproar were really a matter of an expansion in the number of students taking the tests. In truth, standardized-test scores were going up for every economic and ethnic segment of students—it’s just that, as more and more students began taking these tests over the 20-year period of the study, this more representative sample of America’s youth better reflected the true national average. It wasn’t a teacher problem. It was a statistical misread. 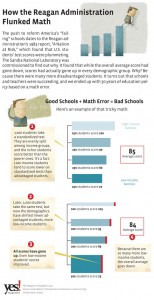 How the Reagan Administration Flunked Math (click image to view larger) The government never officially released the Sandia Report. It languished in peer-review purgatory until the Journal of Educational Research published it in 1993. Despite its hyperbole (or perhaps because of it), “A Nation At Risk” became a timely cudgel for the larger privatization movement. With Reagan and Friedman, the Nobel-Prize-winning economist, preaching that salvation would come once most government services were turned over to private entrepreneurs, the privatizers began proselytizing to get government out of everything from the post office to the public schools. Corporations recognized privatization as a euphemism for profits. “Our schools are failing” became the slogan for those who wanted public-treasury vouchers to move money into private schools. These cries continue today. The era of accountability In 2001, less than a year into the presidency of George W. Bush, the federal government enacted sweeping legislation called “No Child Left Behind.” Supporters described it as a new era of accountability—based on standardized testing. The act tied federal funding for public schools to student scores on standardized tests. It also guaranteed millions in profits to corporations such as Pearson PLC, the curriculum and testing juggernaut, which made more than $1 billion in 2012 selling textbooks and bubble tests. In 2008, the economy collapsed. State budgets were eviscerated. Schools were desperate for funding. In 2009, President Obama and his Education Secretary, Arne Duncan, created a program they called “Race to the Top.” It didn’t replace No Child Left Behind; it did step in with grants to individual states for their public schools. Obama and Duncan put desperate states in competition with each other. Who got the money was determined by several factors, including which states did the best job of improving the performance of failing schools—which, in practice, frequently means replacing public schools with for-profit charter schools—and by a measure of school success based on students’ standardized-test scores that allegedly measured “progress.” Since 2001 and No Child Left Behind, the focus of education policy makers and corporate-funded reformers has been to insist on more testing—more ways to quantify and measure the kind of education our children are getting, as well as more ways to purportedly quantify and measure the effectiveness of teachers and schools. For a dozen or so years, this “accountability movement” was pretty much the only game in town. It used questionable, even draconian, interpretations of standardized-test results to brand schools as failures, close them, and replace them with for-profit charter schools. Resistance Finally, in early 2012, then-Texas Education Commissioner Robert Scott kindled a revolt of sorts, saying publicly that high-stakes exams are a “perversion.” His sentiments quickly spread to Texas school boards, whose resolution stating that tests were “strangling education” gained support from more than 875 school districts representing more than 4.4 million Texas public-school students. Similar, if smaller, resistance to testing percolated in other communities nationally. Then, in January 2013, teachers at Seattle’s Garfield High School announced they would refuse to give their students the Measures of Academic Progress Test—the MAP test. Despite threats of retaliation by their district, they held steadfast. By May, the district caved, telling its high schools the test was no longer mandatory. Garfield’s boycott triggered a nationwide backlash to the “reform” that began with Friedman and the privatizers in 1980. At last, Americans from coast to coast have begun redefining the problem for what it really is: not an education crisis but a manufactured catastrophe, a facet of what Naomi Klein calls “disaster capitalism.” Look closely—you’ll recognize the formula: Underfund schools. Overcrowd classrooms. Mandate standardized tests sold by private-sector firms that “prove” these schools are failures. Blame teachers and their unions for awful test scores. In the bargain, weaken those unions, the largest labor organizations remaining in the United States. Push nonunion, profit-oriented charter schools as a solution. If a Hurricane Katrina or a Great Recession comes along, all the better. Opportunities for plunder increase as schools go deeper into crisis, whether genuine or ginned up.

Infographic: Why Corporations Want Our Public Schools (click image to view larger) The reason for privatization Chris Hedges, the former New York Times correspondent, appeared on Democracy Now! in 2012 and told host Amy Goodman the federal government spends some $600 billion a year on education—“and the corporations want it. That’s what’s happening. And that comes through charter schools. It comes through standardized testing. And it comes through breaking teachers’ unions and essentially hiring temp workers, people who have very little skills.” If you doubt Hedges, at least trust Rupert Murdoch, the media mogul and capitalist extraordinaire whose Amplify corporation already is growing at a 20 percent rate, thanks to its education contracts. “When it comes to K through 12 education,” Murdoch said in a November 2010 press release, “we see a $500 billion sector in the U.S. alone that is waiting desperately to be transformed by big breakthroughs that extend the reach of great teaching.” Corporate-speak for, “Privatize the public schools. Now, please.” In a land where the free market has near-religious status, that’s been the answer for a long time. And it’s always been the wrong answer. The problem with education is not bad teachers making little Johnny into a dolt. It’s about Johnny making big corporations a bundle—at the expense of the well-educated citizenry essential to democracy. And, of course, it’s about the people and ideas now reclaiming and rejuvenating our public schools and how we all can join the uprising against the faux reformers. Dean Paton wrote this article for Education Uprising, the Spring 2014 issue of YES! Magazine. Dean is executive editor of YES! Educators are eligible to receive a free one-year subscription to YES! Magazine.YES! Magazine's stories and positive solutions will inspire your students to make a difference in their own lives and in their communities. Click here for more details and to sign up.
Previous
Next