Abbott previously resisted calls for such an order and at one point banned local governments from requiring masks. First-time violators will be issued a warning, though repeat offenders could be fined up to $250. 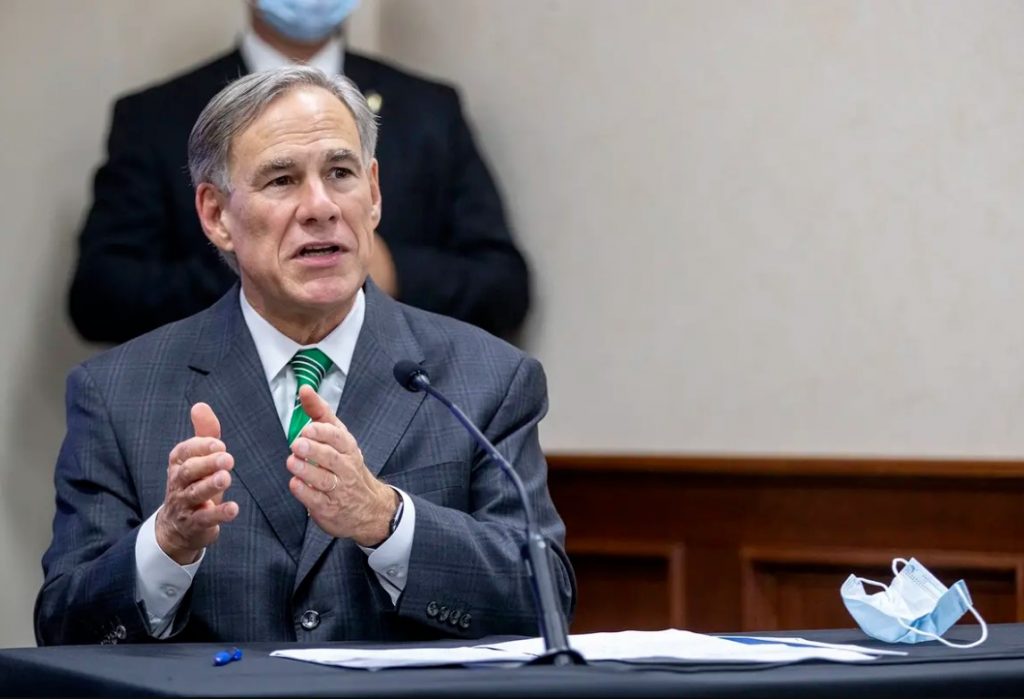 Gov. Greg Abbott's latest order requires Texans living in counties with more than 20 COVID-19 cases to wear a face covering over the nose and mouth while in a business or other building open to the public, as well as outdoor public spaces, whenever social distancing is not possible. Photo credit: Ricardo B. Brazziell/Pool/American-Statesman

Gov. Greg Abbott issued a statewide mask mandate Thursday as Texas scrambles to get its coronavirus surge under control.

The order requires Texans living in counties more than 20 coronavirus cases to wear a face covering over the nose and mouth while in a business or other building open to the public, as well as outdoor public spaces, whenever social distancing is not possible. But it provides several exceptions, including for children who are younger than 10 years old, people who have a medical condition that prevents them from wearing a mask, people who are eating or drinking, and people who are exercising outdoors.

The mask order goes into effect at 12:01 p.m. Friday. It immediately applies to all Texas counties, but counties with 20 or fewer active cases can be exempted — if they opt out. County judges must submit an application to be exempted to the Texas Division of Emergency Management. TDEM will list the counties that have opted out on its website.

Later Thursday, in an interview with Univision in Dallas, Abbott also signaled he might be rethinking plans to open the state's public schools for in-person classes this fall, after state officials said last month that it would be safe.

“If COVID is so serious, it may mean that students are having to learn from home through a distance learning program, something like the use of Zoom or FaceTime or other strategies where a teacher in real time will have the means to speak with a student, a student will be able to speak with other students, and it will replicate the class setting as much as possible,” he said.

State officials have delayed the release of public health guidelines for in-person instruction as cases have continued to rise. But a draft version last month showed they were planning to leave safety regulations up to individual school districts instead of issuing mandates.

The mask order represents a remarkable turnaround for Abbott, who has long resisted a statewide requirement, even as the coronavirus situation has gotten worse than ever over the past couple of weeks in Texas. When he began allowing Texas businesses to reopen this spring, Abbott prohibited local governments from punishing people who do not wear masks. As cases began to rise earlier this month, he clarified that cities and counties could order businesses to mandate that customers wear masks.

In recent days, Abbott had held firm against going further than that, saying he did not want to impose a statewide requirement that may burden parts of the state that are not as badly affected by the outbreak.

Along with the mask order, Abbott on Thursday also banned certain outdoor gatherings of over 10 people unless local officials approve. He had previously set the threshold at over 100 people. The new prohibition also goes into effect Friday afternoon.

Abbott's latest moves come ahead of Fourth of July weekend, which has raised concerns about larger-than-usual crowds gathering while the state grapples with the virus spike.

"COVID-19 is not going away," he said. "In fact, it’s getting worse. Now, more than ever, action by everyone is needed until treatments are available for COVID-19."

In the video, Abbott reiterated his resistance to returning the state to the roughly monthlong stay-at-home order he issued in April. He said Texans "must do more to slow the spread without locking Texas back down." He also said his latest announcement is "not a stay-at-home order" but "just recognizes reality: If you don't go out, you are less likely to encounter someone who has COVID-19."

"We are now at a point where the virus is spreading so fast there is little margin for error," Abbott said.

Abbott's announcement came a day after the number of new daily cases in Texas, as well as hospitalizations, reached new highs again. There were 8,076 new cases Wednesday, over 1,000 cases more than the record set the previous day.

Hospitalizations hit 6,904, setting a new record for the third straight day. The state says 12,894 beds are still available, as well as 1,322 ICU beds.

Abbott has been particularly worried about the positivity rate, or the share of tests that come back positive. That rate, presented by the state as a seven-day average, has jumped above its previous high of about 14% in recent days, ticking down to 13.58% on Tuesday. That is still above the 10% threshold that Abbott has long said would be cause for alarm amid the reopening process.

After listing several exceptions to the mask requirement, Abbott’s order specifies that at least one group of people is not exempted from the order: “any person attending a protest or demonstration” with over 10 people who cannot socially distance. Like other states, Texas has seen massive protests since George Floyd was killed in Minneapolis police custody.

Democrats and local officials had been demanding that Abbott institute such a requirement, and the state party said his new order was "far too little, far too late."

"This is unacceptable," party spokesman Abhi Rahman said in a statement. "Governor Abbott continues to lead from behind rather than implementing preventive measures to stop the spread of the coronavirus."

“We will count this one as a good step that the governor is taking,” Nirenberg added.

Nirenberg was speaking alongside Bexar County Judge Nelson Wolff and the leaders of the region's main hospitals when news of the order broke. Wolff was the first local official to order businesses to require their customers to wear masks.

"Now with the order by the governor, that's going to help take a lot of pressure off the businesses," he said.

But Abbott's mask requirement is likely to further anger a small but vocal group of fellow Republicans in the Texas Legislature who have grown increasingly frustrated with his executive actions. Health experts say masks help slow the spread of the coronavirus, but some conservatives have railed against mask mandates, saying they impose on people's freedoms.

One intraparty Abbott antagonist, state Rep. Jonathan Stickland of Bedford, vented after Abbott's announcement Thursday that the governor "FAILED TO MENTION" the mask mandate during a conference call with legislators.

"What a piece of crap!" Stickland tweeted. "The man thinks he is KING!"

This is Abbott's latest set of moves aimed at trying to get the virus surge under control in Texas. Six days ago, he ordered bars closed and reduced the permitted restaurant occupancy to 50%, among other things.

This article originally appeared in The Texas Tribune at https://www.texastribune.org/2020/07/02/texas-mask-order-greg-abbott-coronavirus/.