This spring, when the COVID-19 pandemic sent our educational system into triage mode, Texas educators were asked by the Texas Education Agency (TEA) to document "student engagement" using crisis codes in the state's Public Education Information Management System (PEIMS). The data collected by the agency was released yesterday, but take it with a big grain of salt. The term "engagement" might be a misnomer based on TEA's definitions, and ATPE's own survey of Texas educators indicates we have a lot of work to do on re-engaging students.

Student engagement as we familiarly know it typically refers to factors such as attendance, participation in lessons, timely completion of assignments, and students' attitudes toward learning. For reporting purposes during the crisis, TEA defined an engaged student as one who was responsive and completing assignments, which is rather vague. For example, secondary students in multiple classes were considered engaged if they were completing assignments in any core content area. Therefore, an "engaged" middle school student could have completed some assignments in an ELA course but in no other courses. An "unengaged" student was defined as responsive but not completing assignments, regardless of the underlying reason for the student's lack of engagement. An "uncontactable" student was defined as not responsive at all.

As defined, the TEA crisis codes seemed to measure whether students were present as opposed to their true engagement. Additionally, these definitions leave out students who may not regularly complete assignments as part of their schooling, such as those who receive special education services.

The student engagement data newly released by TEA, which is still being updated by districts through July 16, showed that 88.72% of students were "engaged." The agency reported that approximately 11% of students either were not engaged for some time or their school districts lost or had no contact with them. For context, this amounts to approximately 609,000 Texas students who severely lacked the emotional, academic, and social stability traditionally afforded by schools and educators this spring. That's a disturbing number, even under TEA's rudimentary definitions of engagement, but input we've solicited from ATPE members suggests a much larger number of students became less engaged once schools were forced to shut down because of the coronavirus pandemic.

The recent ATPE Membership Survey conducted June 5-19, 2020, included a question on student engagement that we believe provides much more insight about how students were participating and learning during remote instruction this spring. When asked how engaged their students were during remote instruction, just over 65% of ATPE members surveyed said their students were "slightly less engaged" or "much less engaged" on average as compared to their level of engagement during previous in-person instruction. This information was provided by 3,250 survey respondents. 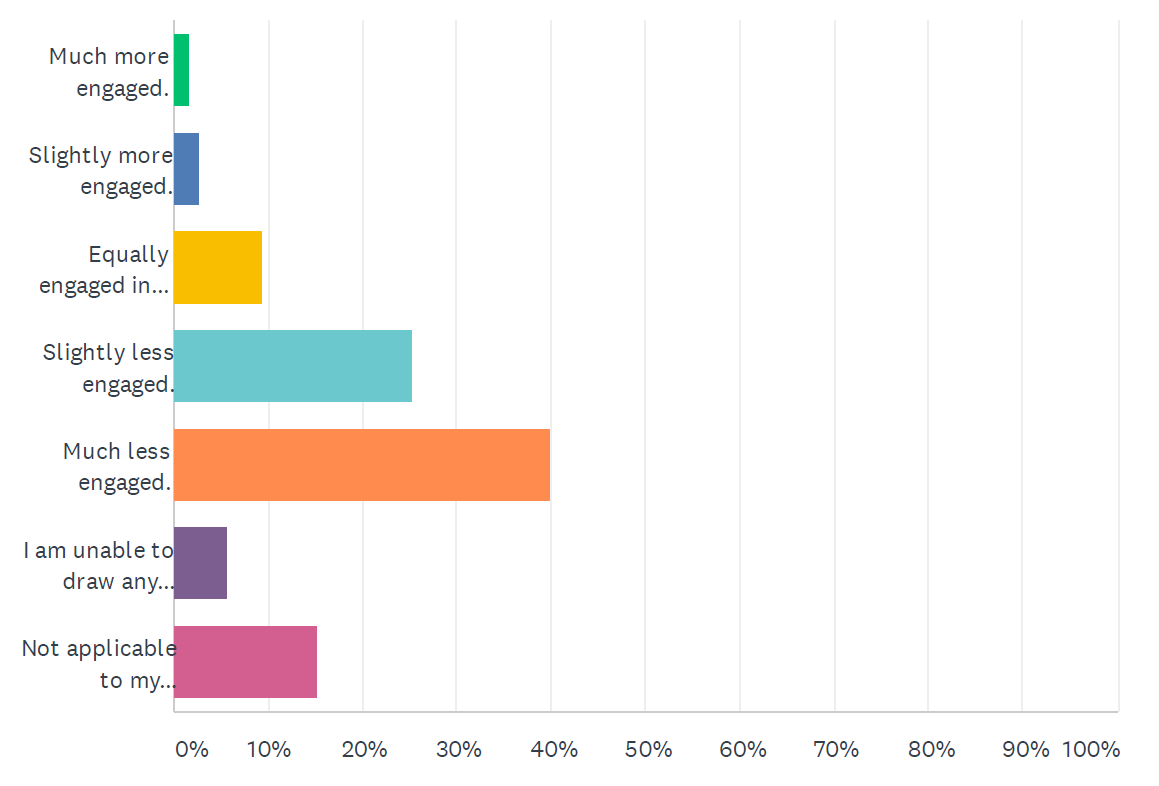 The misnomer of "engagement" as loosely defined by TEA is even more problematic when applied to the agency's disaggregated PEIMS data, which are presented in such a way that suggests students of color, low-income students, and students in younger grades were not as "fully engaged" in school this spring as other students. Whether or not these subpopulations of students were engaged is more accurately framed, we believe, by the barriers students may have faced both in accessing school materials and having the necessary instructional support at home. (Having a stable home setting and parents or caregivers who are present make a difference.) Through TEA's "Strong Start" resources, districts are being encouraged to collect some survey data from families and educators related to barriers as they plan for the upcoming school year.

Where do we go from here? Evidence is mounting that the "COVID slide" will be steep and likely even steeper for students of color, low-income students, and younger students who may not be developmentally ready for remote instruction. With an upcoming school year that will include an even greater emphasis on remote instruction and no plans as of yet from TEA to halt state testing and accountability mandates, it is more important than ever to gather information on the barriers students face and make concrete plans to address them. TEA has said the state intends to use federal emergency dollars to improve connectivity and access to digital devices for students, but these will be of little use if a child has inadequate instructional support at home or no place to call home at all.

Including teacher voices to gather their experiences with students during remote learning and their take on how to improve access to education during a crisis is crucial. ATPE has urged the state and school districts to solicit feedback from educators, including classroom teachers, as they develop plans for the next school year.

An ATPE member told a story of sitting with their student (virtually) to talk through their parents' loss of income, their fears about the pandemic, and adjusted assignment expectations since the student was now working at a job, too. This is not necessarily "completing an assignment," but it is engagement and it is at the core of the work that educators do. If you can't engage a student and have a meaningful relationship, their basic needs will not be met (remember Maslow's Hierarchy of Needs?), and they will never get to a place of learning.

Read this reporting by the Texas Tribune to learn more about the "COVID slide" and the engagement data recently released by TEA.