Texas enrollment in ed prep programs is up, completion is down 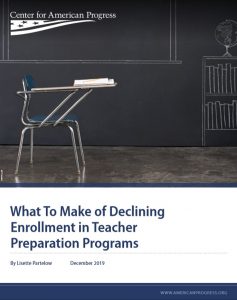 A new report released by the Center for American Progress, an independent, nonpartisan policy institute, provides an analysis of the enrollment and completion decline impacting educator preparation programs (EPPs) nationwide, as well as a special inside look at what California and Texas are doing to address this issue.

In Texas, more aspiring teachers are enrolling in EPPs but fewer candidates are completing them.

From 2010 to 2018, EPPs experienced a nationwide decline in enrollment and program completion. Despite this trend, Texas saw just under a 10 percent increase in enrollment from 2010 to 2018. This was due to massive gains in the non-IHE (institution of higher education) alternative certification industry, which grew by nearly 30,000 students. 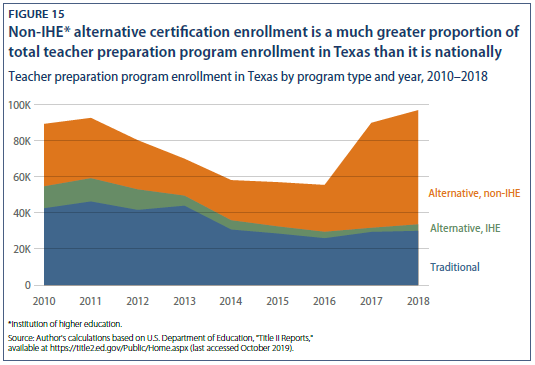 Texas's increase in enrollment was not met with a matched increase in completion. In fact, EPP completion in Texas declined more than 15 percent during the 2010-2018 time period. Furthermore, the percentage change from 2010 to 2018 in completion rates for non-IHE alternative programs is only slightly above 0%, which means that even though these programs enroll the most students, they are getting demonstrably worse at helping them reach the finish line. 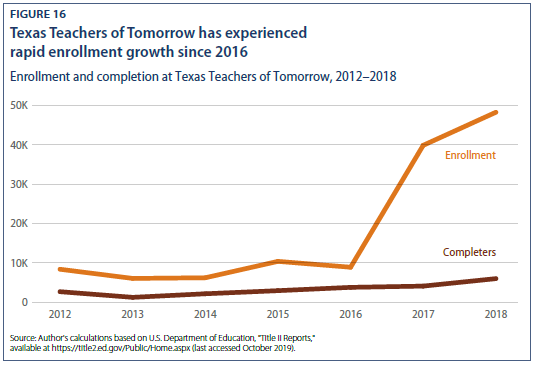 In contrast to Texas, California has experienced proportional declines in enrollment and completion across all program types. California has far fewer alternative certification programs and has implemented policies to improve teacher preparation and retention. These efforts include teaching residencies, a required state-approved induction program, stipends for teachers in high-needs schools, and university partnerships with STEM organizations and nonprofits to aid in the recruitment of math and science teachers.

These findings regarding educator preparation are crucial to keep in mind as we address teacher recruitment and retention in Texas, which has long been an ATPE legislative priority. Texas has incubated a pathway to teaching that despite its popularity may be associated with lower outcomes with respect to long-term employment opportunities, considering that teachers trained in alternative certification programs in Texas have a lower retention rate than those from traditional EPPs, at 65.8 percent compared to 75.2 percent according to the Texas Education Agency. The increased funding for teacher compensation in this year's House Bill 3 was necessary for current teachers, but there is no pay raise that can turn an under-prepared teacher into an effective teacher. It remains important for Texas policymakers to ensure that new teachers are prepared to face the rigors of the classroom, whether they have chosen a traditional route to teaching or an alternative route in which so much of their training takes place online. Additionally, improving recruitment into traditional teacher training programs, which could start as early as high school, is a shift that must happen to generate a well-prepared, lasting educator workforce.

Here are some of the other highlights of the report regarding nationwide trends:

Is the decline consistent across race, gender, and academic discipline?

Were there any cases of increase in enrollment and/or completion, despite the overall decline?

What policy recommendations can we take away from these findings?