At a press conference held this afternoon, Gov. Greg Abbott, Lt. Gov. Dan Patrick, and Speaker of the House Rep. Dennis Bonnen announced that a deal has been reached on legislation to address school finance, property tax relief, and the Teacher Retirement System (TRS). Flanked by members of the conference committees that worked on the bills, the "big three" shared highlights of the final negotiated versions of House Bill 3 and Senate Bill 12 and thanked those who worked on the compromise.

A flyer was shared with reporters touting major components of the agreement, including increasing the basic allotment for schools; providing $5 billion in property tax relief; funding full-day pre-K for low-income students and increasing the funding to serve other students with special needs; calling for outcomes-based funding tied to college, career, and military readiness; reducing recapture by 47% in the next two years; and offering $2 billion in various forms to assist with "dynamic teacher compensation." 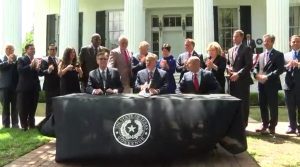 Specific details on the educator compensation piece are unknown at this point, but the new version of HB 3 has been characterized as including both a merit pay program and funding to increase salaries for veteran teachers (those with at least five years of experience), librarians, counselors, and school nurses. Immediately following the press conference, HB 3 author and House Public Education Committee Chairman Dan Huberty told reporters that the merit pay program would not be test-focused but would use T-TESS to help determine which teachers are eligible to become recognized, exemplary, or master teachers. Chairman Huberty added that Texas Tech University would be tapped to act as a "referee" for the program.

The deal announced today also provides for increased funding into the TRS pension program in order to make it actuarially sound. Also, it is believed that the state would substantially raise its contributions for active educators' healthcare premiums under this agreement.

Actual bill language has not yet been released, but ATPE will update our Teach the Vote blog with additional details as soon as our lobbyists have a chance to see and analyze the new bills.