On Tuesday, May 7, 2019, the House Public Education Committee heard seven Senate bills on a variety of topics.

ATPE supported several of these bills, including the following:

ATPE provided written testimony on SB 1455 by Sen. Larry Taylor (R-Friendswood). ATPE believes that the bill as it left the Senate would greatly expand virtual schools, which is problematic because a growing body of evidence indicates full-time virtual school programs are a poor substitute for brick-and-mortar classrooms. Students enrolled in full-time virtual schools regularly underperform their peers enrolled in traditional classroom settings, as indicated by the multiple Improvement Required (IR) designations. Read our written testimony here. 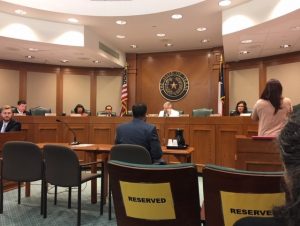 Rep. Ken King (R-Canadian) laid out a newer version of SB 1455 in committee this morning, stating substantive changes to eliminate the portions of the bill that he believes constitute a virtual voucher while maintaining the increased accountability for virtual school providers. ATPE Senior Lobbyist Monty Exter testified neutrally due to these changes in the proposed substitute bill. Exter explained that ATPE supports accountability standards for virtual schools that eliminate bad actors but is opposed to the expansion of virtual schools due to a significant amount of research on their limited effectiveness in promoting student learning.

The following bills were also heard by the Committee:

Chairman Huberty noted that the committee will vote on bills this afternoon. Based on tradition and previous statements from the chair, the House Public Education Committee will likely meet again next Tuesday, May 14, 2019, at 8 A.M.