The Texas Commission on Public School Finance working group on revenue met Tuesday at the Texas Capitol to discuss recommendations to deliver to the full commission. State Sen. Paul Bettencourt (R-Houston), who leads the working group, indicated he is open to using the economic stabilization fund (ESF), which is commonly referred to as the “Rainy Day Fund,” to help fund public education. 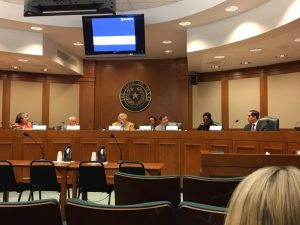 Bettencourt opened the meeting suggesting that state revenues are looking bullish heading into the next budget biennium. Again, Sen. Bettencourt emphasized his priority is phasing out the “Robin Hood” system of wealth equalization through recapture. According to Bettencourt, freezing recapture would cost approximately $2.3 billion.

Before Bettencourt began his presentation, commission member and Austin ISD Chief Financial Officer Nicole Conley Johnson told the group she had identified $14 billion in new programs to propose to the commission.

According to figures Bettencourt provided to the group, the state comptroller increased the revenue estimate for the next biennium to $110.2 billion in July 2018 from $104.9 billion in 2017, a $5.3 billion increase. During the first two months of fiscal year (FY) 2019, sales tax revenues, which represent 58 percent of all state tax collections, are expected to be up ten percent compared to FY 2018.

Bettencourt asserted two point upon which most agree: Without school finance reform, the state’s share of public education funding will continue to shrink, and the amount of funding districts pay into recapture for wealth equalization will continue to increase. Bettencourt emphasized his prediction that increased revenue in FY 2019 will provide additional general revenue (GR) which will be available to help fund schools.

State Rep. Diego Bernal (D-San Antonio), who is vice-chair of the House Public Education Committee, raised a question over how equity would be preserved if legislators make changes to or eliminate the recapture system. State Rep. Ken King (R-Canadian), who is also a member of the House Public Education Committee, also raised a concern that any increase in school funding will need to be sustainable.

Bettencourt presented the governor’s tax cap plan as the solution. The plan would increase funding for districts that increase teacher pay and improve student outcomes, however Rep. Bernal noted that outcomes-based funding threatens to reward districts that already have the resources necessary to improve while neglecting districts that have failed to improve precisely because they lack the necessary resources. The plan would also limit property tax revenue growth to 2.5 percent per year, which the plan promises to make up for with state funding.

Another proposal discussed by Bettencourt is one presented by the Texas Public Policy Foundation (TPPF), a far-right pro-voucher organization, which would aim to eliminate all school district maintenance and operations (M&O) property taxes. This would cost roughly $51.3 billion for the 2018-19 biennium. The TPPF proposal claims to be able to pay for itself by dedicating future increases in state revenues to public education, but Bettencourt conceded that this is an optimistic view.

Bettencourt also briefly discussed the idea of “sharing” recapture. In this plan, property value growth would be divided by thirds, and the benefits from the growth in property values would ostensibly be shared. Additionally, Bettencourt suggested using the increase in production severance taxes – largely due to oil and gas activity in the Permian Basin – to help fund public education. This funding stream currently already flows to public education and general revenue, with an overflow stream that is bifurcated between highway funding and the ESF. Despite the Senate’s opposition to spending ESF dollars in previous legislative sessions, Bettencourt indicated he’s now open to spending ESF money to help fund public education. Johnson argued that this represents a redirection of existing revenues and does not represent the new revenue necessary to improve school performance.

The working group voted to advance each of the proposals except the plan offered by TPPF to be considered by the full commission. Rep. King made the motion to table the TPPF plan, which he declared nonsensical. Several members expressed similar concerns. Closing the meeting, commission chair Scott Brister suggested that legislators should feel less constrained by court rulings enforcing equity. As a justice, Brister was a dissenting voice in the West Orange-Cove school finance ruling.

The full commission will meet Friday, again on December 5, and at least once more during the third week of December. The commission will get a chance to react to Tuesday’s recommendations and will arrive at a decision by the December 5 meeting on what the final report should look like. The following meeting will focus on what the report should say. The commission is required to submit its report to the legislature by December 31.

Brister asked commission members to do their best to reach a unanimous consensus on recommendations, and said that in lieu of a minority report, individual members will be allowed to place letters in an appendix to the final report.