The Texas Commission on Public School Finance working group on revenues, led by state Sen. Paul Bettencourt (R-Houston), met Tuesday at the Texas Capitol to hear testimony. Sen. Bettencourt began the meeting by stating the state must “wean” itself off of the “Robin Hood” system of wealth equalization through recapture. 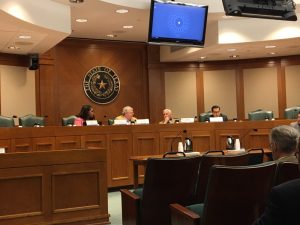 Bettencourt set a target date of November 27 for a vote on recommendations and anticipated sharing those recommendations with the full commission in December. The commission’s report is due to the legislature by the end of December.

Austin ISD Chief Financial Officer Nicole Conley Johnson followed up Bettencourt’s remarks by stating a separate goal of identifying $6 billion in additional funding for public schools. Johnson and Bettencourt have stood on opposite sides of most school funding discussions.

Dale Craymer, president of the Texas Taxpayers and Research Association (TTARA), was the first witness invited to testify. Craymer testified that the recapture system is likely required based upon school finance court rulings, and noted that reducing recapture and reducing property taxes are not one in the same. Craymer suggested property taxpayers could be provided relief by using value growth to reduce the compression percentage downward, yet offered no direction with regard to relief for schools. Craymer suggested legislators must first determine what outcomes are desired before determine how much funding is needed.

Chandra Villanueva with the Center for Public Policy Priorities testified that recapture is necessary to level the playing field between school districts with vastly unequal property wealth. Instead, Villanueva testified that the overall system has failed and suffers from underfunding. Villanueva suggested instead updating the costs of education, adjusting for inflation, and slowing the growth of charter schools, which are pushing some districts into recapture.

Scott Brister, who chairs the commission, challenged the notion of inadequate funding. Villanueva responded that adequacy targets are an appropriate goal, and waiting to invest more resources only deepens the deficit lawmakers must eventually address. Johnson launched into an impassioned explanation of the fiscal challenges facing schools, which have seen funding decline while being asked to do more.

David Thompson testified that the shift from the state toward local property taxpayers is being driven by value growth, and urged legislators should commit at least a portion of value growth to increasing the basic allotment every session. Thompson also recommended closing a number of tax loopholes, such as for online retailers, and increasing the gas tax.

Speaking on behalf of Gov. Greg Abbott, former state Sen. Tommy Williams testified that the state should pay teachers more and reduce the burden of property taxes, which will require additional state funding. Notwithstanding this, Williams said funding should not be increased without accompaniment by school finance reform. The governor’s plan contains three essential elements: Rebalancing the state share of funding, paired with compression of local school property taxes rates; slowing the growth of local property tax bills; and treating all students equally, based on individual student needs as opposed to school district property values, which will require reducing the growth of recapture.

Williams then proceeded to outline the governor's plan, which can be found here. In it, the governor's office suggests capping school district Tier 1 maintenance and operations (M&O) tax revenue growth at 2.5 percent and replacing the lost funding with state dollars. The plan does not specify a funding mechanism or source. The plan also proposes outcome-based bonuses, awarding charter school attendance credits, and paying stipends to teachers who teach in more difficult classrooms, along the lines of Dallas ISD's ACE program. This marked the first time the plan has been presented in public.

Asked by Sen. Bettencourt what the governor's idea of additional state aid looks like, Williams suggested he would rather lawmakers not "back into that number" from available revenue, but rather to try and put a price tag on the recommendations from the commission's working group on expenditures. Johnson followed up with a question regarding how much it would cost to buy down the tax rates as suggested by the governor. Williams did not offer an estimate.