The Senate Select Committee on Violence in Schools and School Security began its first hearing Monday with a moment of silence for the victims of school shootings. Chaired by Senate Education Committee Chair Larry Taylor (R-Friendswood), the select committee was assigned by Lt. Gov. Dan Patrick after Gov. Greg Abbott released a list of school safety proposals, many of which would require legislative action. 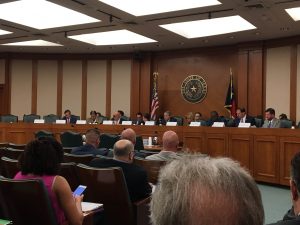 The select committee is composed of six Republicans and three Democrats, and is scheduled to meet Monday and Tuesday to discuss potential ways to prevent future school shootings like the one in Santa Fe, Texas. Monday’s agenda included considering testimony on the following:

Texas Education Agency (TEA) Commissioner Mike Morath was the first witness invited to testify, and briefed members on steps the agency has taken to improve school safety. Morath noted that Santa Fe ISD was in fact one of 186 districts that received a special designation for going above and beyond school safety requirements. The commissioner added the agency has secured $62 million in additional federal funding under the Every Student Succeeds Act (ESSA), which it is directing toward school safety. Morath noted that TEA lacks the authority to implement many of the governor’s proposals without specific instructions from the legislature. The state will also compete for a fraction of $75 million available through a nationally competitive grant from the U.S. Department of Justice.

State Sen. Charles Schwertner (R-Georgetown) discussed legislation he passed during the 2017 legislative session to provide training for school staff to identify students who may be experiencing or at risk of a mental health crisis. Sen. John Whitmire (D-Houston) expressed interest in this idea, albeit while expressing a concern that students’ private mental health records remain confidential. Sen. Royce West (D-Dallas) asked members to evaluate the current state of mental health services in Texas and consider whether adequate resources are in place.

Asked by Sen. Brandon Creighton (R-Conroe) whether the legislature should expand the agency’s authority to implement some of the governor’s proposals, Morath hesitated to offer an opinion. The commissioner ultimately stated that TEA is weak both in terms of capacity and regulatory authority when it comes to school safety. Morath testified TEA has only one quarter of one full-time equivalent staff member dedicated to school safety.

The next invited witness was Christopher Huckabee, who chairs the Texas Society of Architects School Safety Workgroup. Huckabee explained how campus architecture has changed in response to school shootings going back to Columbine, such as efforts to push the public back from campus buildings and direct visitors through a single entrance. Huckabee testified that fire codes are very specific when it comes to having multiple entrances and exits for students and staff. He explained, “Even the best hardened campus are not perfect scenarios in this regard.” Chairman Taylor suggested that fire codes may need to be revisited, and the focus may need to shift away from fire safety. Sen. West asked about distinguishing between fire alarms and lockdown alarms, and Huckabee suggested schools could use an app to communicate emergency alerts via mobile devices.

Sen. Joan Huffman (R-Houston) contended that implementing metal detectors is the only surefire way to prevent guns from being brought into schools in the first place. Huckabee stated the challenge to districts would primarily be one of resources, and warned students may still find ways to get around metal detectors. Chair Taylor pointed out that congestion resulting from metal detectors may create a new potential target in a large group of students awaiting entry.

San Antonio ISD Police Chief Joe Curiel led off a panel of law enforcement officers, and testified with regard to training and procedures currently in place. Chief Curiel mandated child crisis intervention training (CCIT) for all SAISD officers, which involves talking with students and building relationships in order to identify potential issues early on. Chief Curiel testified he believes identifying potential shooters is all about human intelligence.

Chair Taylor asked about the ability of law enforcement to track students’ social media accounts. Chief Curiel indicated that an officer is dedicated to assessing social media posts, but not necessarily monitoring all accounts.

Sen. Lucio asked Chief Curiel his position on whether teachers should carry guns, and how officers would respond if they encountered an armed teacher during an active shooting. Chief Curiel indicated he is neutral on the issue, but warned that “things could go wrong” if officers encountered someone who is armed when the shooter had not been identified yet. The chief also cautioned against viewing metal detectors as the sole solution, and repeated that human intelligence is the key.

“We can fortify our campuses all we want, but that does not guarantee a weapon will not be carried in,” said Chief Curiel.

Sen. Creighton pushed Chief Curiel for a firmer answer on whether adding armed teachers to the mix would save lives, providing that they were well-trained and potentially from a military or law enforcement background. Chief Curiel repeated his concern that responding officers, in particular those who don’t work at the school, would not immediately know the difference between the teacher and the active shooter.

“Having people armed within the campus would have to require a lot of training and the coordination effort that takes place when a situation like that takes place,” said Chief Curiel.

Pressed by Sen. Kelly Hancock (R-North Richland Hills) to take a position on whether the potential of facing armed staff would be more of a deterrent than the baseline prohibition against firearms other than those carried by law enforcement officers, Chief Curiel stated that an individual who has determined to carry out a school shooting is not in a rational mental state and would likely make their decision without regard to district firearm policy. Chief Curiel emphasized that the department is neutral on the issue of arming teachers, and would adjust their policies and procedures to accommodate any decision the local board of trustees decides to take.

Midway ISD School Resource Officer Jeff Foley testified on the behalf of the Texas Association of School Resource Officers, and told members that programs to arm teachers, such as the school marshals program, may be beneficial to rural districts where law enforcement may not be able to quickly respond. On the other hand, he expressed concern over such programs in urban and suburban schools that have law enforcement personnel assigned to the campus.

Mike Matranga, Executive Director for Security and School Safety at Texas City ISD, said no school can be 100 percent secured. More importantly, he said, is addressing students’ mental health needs. Matranga indicated he believes the larger issue is one of weakening social values, a lack of personal responsibility and children lacking appropriate avenues to channel their frustration. Matranga suggested that many civilian school boards lack the expertise to make the most informed decisions regarding school security, and opined that hiring an additional police officer would be better than a school marshal. Matranga contended teachers play a different, albeit equally important, role.

“Our teachers are our first line of defense,” said Matranga, emphasizing the role of teachers in identifying kids who are having problems. Yet pointing to the state of school funding, Matranga acknowledged that the state is asking teachers to do more each year without adequate compensation.

Public testimony began with metal detector industry respresentatives. Their testimony focused on the real and perceived benefits of metal detectors, such as their potential to discourage potential criminals. One witness argued that x-ray machines are a larger cause of congestion than metal detectors, which can come in the form of either walkthrough units or handheld wands. The speed of detection can vary depending upon sensitivity and the procedure used for checking people who set off alerts.

The committee will meet again Tuesday morning to consider the following charge:

Members will hear invited testimony on these topics, and members of the public will be limited to two minutes of testimony.