Here's a look at the week's education news stories from ATPE: 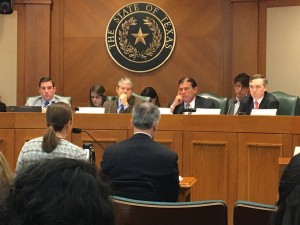 The Senate Education Committee met yesterday to look at two educator misconduct bills involving inappropriate relationships with students and “passing the trash.” ATPE Lobbyist Kate Kuhlmann testified in support of the bills. Senate Bill (SB) 7 by Sen. Paul Bettencourt (R) and SB 653 by Sen. Van Taylor (R) would prohibit educators who are dismissed from their positions in one school district due to sexual misconduct from being hired at another district, an act sometimes referred to as “passing the trash.” The bills would also require more ongoing education for educators on the subject, add reporting requirements for principals, require that schools develop an electronic communication policy, and further penalize associated misconduct. In her testimony, Kuhlmann highlighted the importance of ongoing education, beginning in educator preparation programs and continuing throughout educators’ careers, and the work ATPE does to educate both future and active educators about maintaining appropriate boundaries and relationships with students. While she reminded Senators that an extremely small percentage of educators in Texas account for such misconduct, she stated that ATPE knows one incident is too many and is committed to being a part of the solution. Discussion during the hearing did raise the need for some additional clarity with regard to certain language in the bill. For more, watch an archived recording of the hearing here. 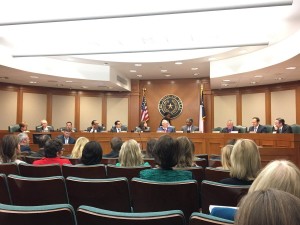 The House Public Education Committee held its first hearing of the session on Tuesday, taking invited testimony only. The committee announced plans for upcoming hearings on school finance, to be followed by an examination of accountability, including the controversial "A through F" labeling system that was adopted last session for campuses. Read more about Tuesday's hearing in this blog post from ATPE Lobbyist Mark Wiggins.

ATPE weighed in this week on discussions for education-related items in the state budget. ATPE Lobbyist Monty Exter testified before the Article III Subcommittee of the House Committee on Appropriations on Monday. In addition to school finance and the need to fund pre-Kindergarten programs, Exter also discuss the looming problem of healthcare affordability for education employees. The Teacher Retirement System board of trustees is also gathering this week to discuss similar issues. Read more in Exter's most recent blog post for Teach the Vote.

The fight to protect educators’ voices continues at the Texas Capitol, where ATPE continues to monitor two anti-teacher bills that would restrict educators’ control over their own paychecks while protecting other groups of public employees. After forceful testimony in opposition by ATPE members, the Senate State Affairs Committee nonetheless advanced Senate Bill 13 by state Sen. Joan Huffman (R-Houston) last week by a vote that split along party lines. Sens. Bryan Hughes (R-Mineola), Brian Birdwell (R-Granbury), Brandon Creighton (R-Conroe), Jane Nelson (R-Flower Mound) and Charles Schwertner (R-Georgetown) joined Huffman voting in favor of the bill. Sen. Craig Estes (R-Wichita Falls), who expressed concern earlier in the week over the bill’s unequal treatment of educators, was absent for health reasons and unable to vote. Due to Senate rules, the earliest SB 13 is likely to be heard on the Senate floor is March 10. On the other side of the Capitol, the companion House Bill 510 by state Rep. Sarah Davis (R-West University Place) was referred to the House State Affairs Committee, where the payroll deduction bill was unable to gain the traction needed to advance last session. No hearings have been scheduled so far.

It is critical that ATPE members continue to contact your legislators through Advocacy Central and voice your opposition to both SB 13 and HB 510. The best way to fight these teacher-bashing bills is to join us March 5 and 6 for ATPE at the Capitol Day and visit your legislators in person!   Today is the last day to submit input to the Texas Education Agency (TEA) on the potential addition of a new Pre-Kindergarten to Grade 3 Educator Certificate, which would be offered in addition to the Early Childhood-Grade 6 Core Subjects Certificate currently administered by the agency. For more information and historical context on the topic, revisit ATPE Lobbyist Kate Kuhlmann's post here. The survey can be accessed here.   Next week, stay tuned to Teach the Vote for the latest updates from the 85th legislative session, as well as the upcoming March 3 meeting of the State Board for Educator Certification. ATPE Lobbyist Kate Kuhlmann will also have an article about new efforts at the federal level to fund private school vouchers. We're also gearing up for our lobby day and political involvement training event known as ATPE at the Capitol on March 5-6, 2017. ATPE members can find the complete schedule and updates on the event here.