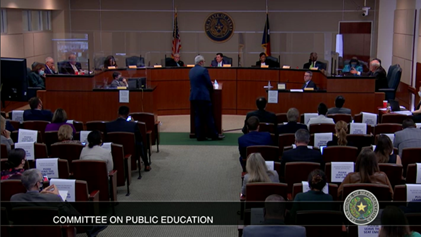 The Texas House Public Education Committee met Tuesday, March 30,to hear new bills, including several pertaining to virtual education. Student testing and accountability were also major topics of discussion in the fourth substantive hearing on bills the committee has held this session. The committee also took votes Tuesday night on some pending legislation, including a high-profile school finance bill.

ATPE opposed several of the bills regarding virtual education heard by the committee today:

ATPE testified in support of HB 3643 by King, K. (R-Hemphill), which instead of expanding virtual schools would create a “Texas Commission on Virtual Education” to study and make recommendations for virtual education, including instructional delivery and funding. As outlined in ATPE’s written testimony, ATPE has recommended that the commission include more educators, representing both elementary and secondary school expertise.

The committee also voted to approve several bills that were previously heard, recommending them for consideration by the full House: All of the bills were approved with a vote of 12 ayes to 0 nays (with Rep. González absent), except for HB 2557, which was voted with 9 ayes, 2 nays (Meza, Talarico), and 1 member “present not voting” (Bernal).

We expect the House Public Education Committee to meet again next Tuesday, April 6. Stay tuned to Teach the Vote for updates. ATPE members are also encouraged to visit Advocacy Central to follow the progress of bills and send messages to their lawmakers about legislation of interest or concern.