READING ACADEMIES: Since the recent announcement of planned year three updates to the Texas Reading Academies, educators have eagerly awaited further details. The Texas Education Agency (TEA) hosted its first webinar on the changes this week, and two more webinars with the same content will be offered next week. TEA staff provided some further information on new flexibilities, such as the Reading Academies test-out, but there are still some gaps in what we know. Those who wish to test out will have to be recommended by their school district and have a proven track record of high b performance and outstanding evaluations, but it is unclear how this will be demonstrated. Get the full scoop in this blog post by ATPE Lobbyist Andrea Chevalier.

SBOE: The State Board of Education (SBOE) met in Austin this week to discuss revisions to a handful of Texas Essential Knowledge and Skills (TEKS) subjects, including technology applications and personal financial literacy. In his regular update to the board, Texas Education Commissioner Mike Morath answered several questions about reading academies and confirmed that some educators may be able to test out. He also addressed learning loss during the pandemic and efforts to reduce the teacher shortage. Read more in this blog post by ATPE Lobbyist Mark Wiggins. 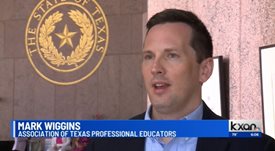 INTERIM: On Monday, Lt. Gov. Dan Patrick (R) issued interim charges for Senate committees to study this year ahead of the 2023 Texas legislative session. From parent empowerment to school library books, the charges reflect the current conservative political platform. Conspicuously, private school vouchers did not make the list. For more on the Senate interim charges for the education and other relevant committees, see this blog post by ATPE Governmental Relations Director Jennifer Mitchell.

PATRICK: Lt. Gov. Patrick promised his campaign supporters this week that he would get a “Don’t Say Gay” bill passed in Texas next session, following Florida’s recent actions. The Florida bill provides for parental notice and prohibits certain classroom discussions about sexual orientation and gender identity in a manner similar to how 2021 Texas legislation on “critical race theory” addresses certain discussions about race. The Florida bill applies to grades K-3, but some Texas lawmakers have supported the idea of banning such discussions up to 8th grade, according to the Texas Tribune. Republican party leaders suggest that teachers are inappropriately talking about their family structures and sex lives in the classroom.

ATPE Executive Director Shannon Holmes said Patrick’s move is yet another election year political stunt, adding, “Such legislation would be largely meaningless in Texas,” because of our state’s existing laws protecting parents’ rights and involving educators, parents, and the public in the SBOE’s process for adopting curriculum standards. “We are not Florida, and we do not need Florida’s legislation,” said Holmes. Read the full ATPE statement here.

CERTIFICATION: ATPE submitted public comments this week in opposition to a proposal before the State Board for Educator Certification that would replace the current EC-12 Pedagogy and Professional Responsibilities (PPR) test with the nationally developed performance assessment edTPA. ATPE opposes the move for several reasons, but one of our biggest concerns is that the new exam will constrict the teacher pipeline at a critical time.

The edTPA exam costs $311 (almost $200 over the cost of the PPR), and multiple states that previously adopted edTPA have discontinued its use because of negative impacts to the supply and diversity of their teacher pipeline. Furthermore, the exam, which is not Texas-specific and would force educator preparation programs to conform to a nationalized curriculum reminiscent of Common Core, lacks key Texas teacher standards relating to ethics and professional responsibilities to parents, students, and the community. While performance assessments have great merit, ATPE believes they are better used within a preparation program rather than as a summative, high-stakes certification exam.

SBEC is likely to approve the proposal at its April 29 next meeting, after which it will head to the State Board of Education for final approval or veto. ATPE has joined hundreds of other K-12 stakeholders and educator preparation programs opposing the replacement of the PPR exam with edTPA and invites other interested stakeholders to use this link to sign a letter that will be distributed to SBEC before their next meeting.

ELECTIONS: Senator Beverly Powell (D-Fort Worth) ended her re-election bid this week for Senate District 10, which was dramatically redrawn during redistricting. On Twitter, Powell said her seat was now “unwinnable.” Federal court challenges to the redrawn district, based on allegations of intentional racial discrimination, have not been successful. The seat will now likely go to current Representative Phil King (R-Weatherford), upping the Republican majority in the Texas Senate.

Gov. Greg Abbott (R) has ordered a June 14 special election to fill the unexpired term of U.S. Rep. Filemon Vela (D-Brownsville), who resigned from Congress. Early voting will begin May 31 and will be based on the current district boundaries, which could favor a Republican win. In November, the seat will be up for election again and will follow the new district boundaries, which are more favorable to Democrats. Therefore, Vela’s seat is one to watch as a potential pick-up for Republicans in Congress.

On Saturday, May 7, voters will decide local school board races, school bonds, other local elections such as mayor or city council, and two statewide constitutional amendments related to property taxes (which impact school funding). There are also two special elections for state House seats in Houston and Brownsville. As long as you were previously registered to vote and haven’t changed your name or address, you should still be registered. Check your voter status here.

On Tuesday, May 24, all voters have the opportunity to vote in either the Republican or Democratic primary runoff elections for statewide offices and several district seats.

For more information on the May elections, visit bit.ly/Vote-in-May.

LOANS: This week, the federal government announced a seventh extension of the moratorium on federal student loan payments, interest, and collections, this time through August 31, 2022. The U.S. Department of Education also plans to reset millions of borrowers’ accounts to good standing from previously being in default. Read more in this reporting by NPR.