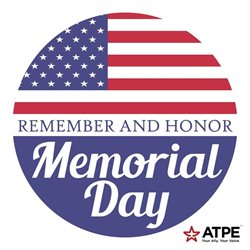 The ATPE state office will be closed Monday, May 30, in observance of Memorial Day. In this edition of our Week in Review, the ATPE Governmental Relations team recaps the past week’s education news, plus legislative and election updates.


UVALDE: On Tuesday, May 24, an 18-year-old former high school student entered Robb Elementary School in Uvalde, Texas, where he fatally shot two teachers — Irma Garcia and Eva Mireles — and 19 children, injuring 17 others. The killer also shot his grandmother before crashing her truck in a ditch and attacking the school. Texans and people around the world are in a collective state of grief, asking how this could have been prevented and what can be done going forward.

ATPE has compiled a list of opportunities for Texans to support the Uvalde community. Also read ATPE’s May 24 statement in response to the shooting here.

In the aftermath of this week's violence, some state elected officials have pointed to school safety and mental health bills the Legislature passed in recent years, particularly in response to the 2018 mass shooting at Santa Fe High School in Texas. In 2019, lawmakers allocated $100 million through the school safety allotment, which school districts could use for school hardening and other preventive measures. ATPE supported the legislation, including Senate Bill (SB) 11, which the Legislature passed in 2019. But as Senior Lobbyist Monty Exter told The Texas Tribune this week, “The per-student allotment and one-time grants set aside for school security could never pay for the types of construction projects lawmakers have touted publicly in the wake of the shooting,” such as restricting the number of entrances to school buildings.

ATPE Executive Director Shannon Holmes also discussed recent years' school safety legislation with KSAT News, explaining options districts have for allowing certain staff to be armed, but recognizing the challenges that persist. “This is really not an education issue,” said Holmes. “This is a societal issue that is being acted out on school campuses and targeting the most vulnerable people in our society.”

LEGISLATURE: A number of interim legislative hearings took place this week. On Monday, the Texas Commission on Special Education Funding discussed how other states have used private school vouchers for students in special education. A point of contention is whether private entities that take public dollars under a voucher plan must comply with federal special education laws that guarantee rights and due process for those students and their families. Archived video of the meeting is available here.

The Senate Finance Committee also met Monday to discuss interim charges relating to property taxes. The committee heard presentations from the Legislative Budget Board and State Comptroller's office on property tax revenue, which is the primary source of funding for Texas public schools, and numerous exemptions that exist. Earlier this month, Texas voters approved a constitutional amendment that will raise the homestead exemption to 40% and provide additional tax relief for seniors and people with disabilities. The committee’s discussion revealed that there is now a disconnect between rising property tax appraisals and property tax bills because of recent legislative action to compress tax rates. Although many homeowners are seeing significant increases in the appraised value of their property in 2022, their tax bills this fall will likely remain flat or even decrease. Watch video of the Senate Finance Committee meeting here. 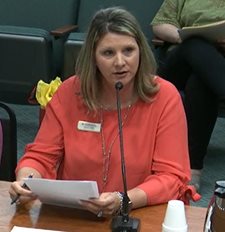 The Senate Education and House Public Education Committees met Tuesday, both discussing COVID-19 impacts on education and the implementation of recent bills, such as 2019’s House Bill (HB) 3. ATPE State Vice President Stacey Ward testified in the Senate committee, emphasizing the importance of educators and their need for more time to remediate students in the wake of COVID-19. Ward also advocated for compensation that reflects the hard work and expertise of educators. Both committees heard presentations from Commissioner of Education Mike Morath. The House Public Education Committee discussed only a portion of its agenda before adjourning early due to the tragedy in Uvalde. ATPE Lobbyist Andrea Chevalier was scheduled to give invited testimony on the HB 3 Reading Academies requirements, but that portion of the hearing did not take place and will have to be rescheduled. Read more about each of the education committee meetings in this blog post. Watch archived video of the Senate hearing (including Ward's testimony at the 6:56:18 timestamp) here. View the House committee meeting video here.

The Senate Committee on State Affairs met Wednesday with an interim charge relating to state pension plans on its agenda. Senators raised questions over purported investor activism by three providers that manage large portions of the Employee Retirement System’s (ERS) investment portfolio. The accusation revolved around the providers’ alleged refusal to work with companies that are not “climate-friendly.” A representative from the Teacher Retirement System (TRS), which uses the same providers, testified that the TRS board had already adopted proactive policies to address the issue, which some consider to be at odds with the state’s oil and gas industry interests. Click here for archived video of the hearing.

A meeting of the Texas Commission on Virtual Education that had been scheduled for Wednesday was cancelled after the Uvalde school shooting.

Finally, the Texas House Select Committee on Youth Health & Safety met Thursday to discuss an interim charge on improving the coordination between programs that serve youth and their families, expanding prevention efforts, and strengthening systems to better serve youth closer to their homes. A representative from Communities in Schools testified that their program has had success in providing wrap-around services to students, identifying mental health issues in students, and increasing graduation rates. Other programs, such as the Nurse Family Partnership and Child First (not currently offered in Texas), have addressed youth mental health needs by working to strengthen parent-child relationships and reduce the prevalence of adverse childhood experiences. Click here to watch archived video of the hearing. 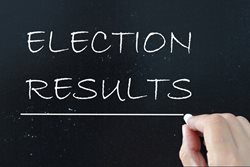 RUNOFFS: Amid the terrible events of Tuesday and multiple legislative hearings, there also was a runoff election to determine the Texas Republican and Democratic candidates who will represent their party on the November general election ballot. ATPE Governmental Relations Director Jennifer Mitchell recapped the unofficial election results in this blog post, including the outcomes in statewide races such as Attorney General and Lieutenant Governor, State Board of Education contests, and runoffs for Texas House and Senate seats. Turnout was 8.1%, which is relatively high for primary runoffs in Texas.

TRS: The Teacher Retirement System (TRS) is accepting applications and nominations through June 15 for an open active teacher seat on the TRS-Care Retirees Advisory Committee (RAC). The RAC meets twice a year to recommend changes to agency rules and legislation affecting TRS-Care. Find more information in this blog post.