SESSION: The 88th Texas Legislature is set to convene Tuesday, Jan. 10, in Austin. The legislature meets for 140 days in every odd-numbered year to consider legislation on all manner of subjects, including public education. The stakes for this session could not be higher, as Gov. Greg Abbott (R) has declared it a top priority to pass a private school voucher bill. ATPE has long opposed vouchers that would divert taxpayer dollars from public school classrooms across the state in order to subsidize tuition at exclusive private and parochial schools in the state’s metropolitan centers.

Lawmakers are also expected to discuss the critical shortage of qualified educators in Texas. According to KXAN, Austin ISD’s website this week listed 200 teaching positions that still need to be filled halfway through the school year. Educators have consistently cited pay and working conditions as important factors driving quality teachers out of the profession.

“We need to do more to be able to help new folks to get into the profession, and we need to do more for folks who are in the profession to incentivize them to stay,” ATPE Governmental Relations Director Monty Exter told KXAN this week. “And we really need to come together, too, at this point more than ever to help to convince our state legislature what is right.” 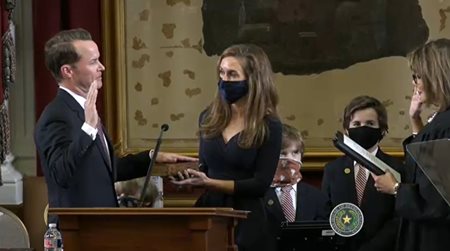 The legislature’s first order of business will be to elect a Speaker of the Texas House. Rep. Dade Phelan (R-Beaumont) currently serves as speaker and is expected to easily win reelection to a second term. With the exception of emergency items declared by the governor, the House and Senate are constitutionally prohibited from passing bills at the beginning of the session. Work typically begins with the announcement of committee assignments later this month or next.

Texas Comptroller Glenn Hegar will kick off the week with a press conference Monday to announce the biennial revenue estimate (BRE), which dictates how much money lawmakers are able to spend in the upcoming session. The last report from Hegar’s office indicated legislators will inherit a surplus of roughly $27 billion.

PRIORITIES: ATPE shares its legislative priorities before each regular session of the Texas Legislature. Based on our member-written and approved ATPE Legislative Program, the association’s 2023 priorities reflect the most pressing concerns of the educators we represent and the greatest needs of our state’s public education system, from keeping schools safe to preventing funding losses. View the full priorities here. 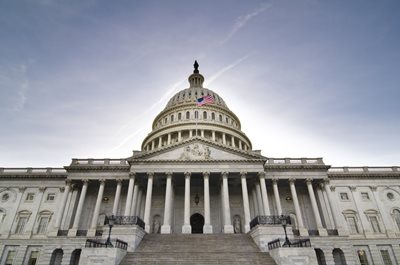 CONGRESS: After a week’s worth of votes, the U.S. Congress remains frozen as the Republican Conference has been unable to elect a speaker from within its ranks. Republicans control a slim majority, 222 of the 435 House seats. Democrats hold 212 seats, and one seat remains vacant. The speaker must be elected by a majority of members present, meaning 218 votes if all members are present. As of Friday afternoon, a block of roughly 20 Republicans have prevented former Republican Minority Leader Rep. Kevin McCarthy (R-CA) from reaching the number of votes needed to win.

Without a speaker, the U.S. House is unable to adopt the rules necessary to conduct business. New members are cannot be sworn in, current members are unable to renew their security clearances, and legislative staff will soon be unable to receive paychecks. The longer the impasse, the more the federal government will become unstable as those elected to oversee critical programs such as national security are locked out of their official functions. As of Friday morning, it remains unclear whether McCarthy or the Republican Conference have a strategy to resolve the issue of speakership and begin the business of governing.

SOCIAL SECURITY: As one door closes, ATPE begins looking for the next window of opportunity on the Windfall Elimination Provision (WEP) and Government Pension Offset (GPO) that reduce the Social Security benefits of many educators. The end of the last congressional session concludes Rep. Richard Neal’s (D-MA) chairmanship of the U.S. House Ways and Means Committee and the brings the retirement of ranking member and former chairman Rep. Kevin Brady (R-TX). For years, Brady and Neal have championed a bipartisan approach to Social Security reform in Congress. Their exit from top leadership roles brings significant uncertainty over where the decades-long quest to repeal the WEP and GPO will go next. 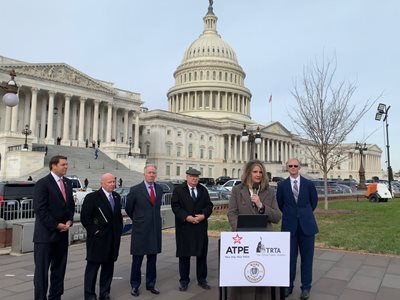 Despite a heavy push last month, led primarily by ATPE, the Texas Retired Teachers Association, and the Mass Retirees Association, for Congress to include a WEP fix in a year-end spending bill, the year came to a close without a resolution.

“We all saw there was a window with ranking member Brady and Chairman Neal … both having extremely similar bills in past sessions,” ATPE's Monty Exter told the San Antonio Express News this week. “With so much momentum around the issue in general… we did feel like this was the best shot we were going to get for a little while.”

ATPE will continue to monitor as the U.S. House is reorganized under new leadership and we begin the search for the next congressional leader(s) who will champion the cause of making social security fair for Texas educators. Read more in this article by the Express News.

ATPE: Registration is open for ATPE at the Capitol, our political involvement training and lobby day event held during each legislative session. Exclusively for ATPE members, the event is taking place Feb. 20-21 at the Austin Marriott Downtown and the Texas State Capitol. ATPE at the Capitol will feature training sessions, Q&A with a panel of legislators, opportunities to engage with the media, visits to legislative offices, and an optional evening fundraising event. There is no registration fee for ATPE members to attend, and travel incentives are available. Jan. 20 is the deadline to apply for financial aid, and hotel reservations must be booked no later than Jan. 26. Learn more and register at atpe.org/aatc.

PROMOTIONS: We are proud to announce some big changes within the ATPE Governmental Relations (GR) Department. ATPE Executive Director Shannon Holmes has promoted former GR department head Jennifer Mitchell to a new position of Associate Executive Director – Member Services. In her new role, Mitchell will continue to oversee the GR department’s work as well as that of three other departments under the member services umbrella. Former Senior Lobbyist Monty Exter is the new Director of Governmental Relations and former Lobbyist Mark Wiggins has been promoted to Senior Lobbyist. Congratulations, GR team! 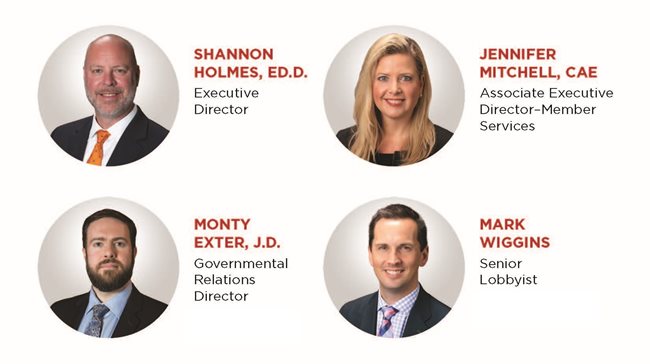