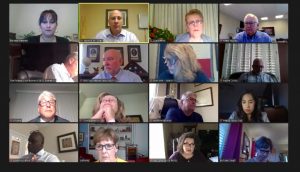 On Tuesday, Sept. 1, the State Board of Education (SBOE) met for the first of two virtual meetings this week in order to clear a handful of less controversial items from the board’s agenda before all 15 members meet in person next week. The board discussed the next round of requirements for instructional materials and held separate meetings in their various committees.

The board’s Committee on School Finance/Permanent School Fund (PSF) received a report on management of the PSF by investment consulting firm RVK. The report is a result of House Bill (HB) 4388 which required the Texas Education Agency (TEA) to conduct a study regarding PSF distributions.

The PSF provides the state’s share of funding for public schools in Texas. The majority of the PSF is managed by the SBOE, but a portion of the fund consisting of real estate investments is managed by the School Land Board (SLB) under the General Land Office (GLO). The 86th Texas Legislature in 2019 examined the split management structure of the fund after a dispute arose between the SBOE and SLB over changes the SLB made to the way it has typically distributed funds.

Since 2003, the PSF has grown at an annual rate of 3.1% on average, while assets per student have increased by 1.3%. Distributions per student on a real basis have fallen 1.4% since 2003 but have grown 3.8% over last 10 years. Total distributions from both the SBOE and SLB have remained largely constant over the last 10 years, at around 3.3%.

The PSF’s stated goal is to achieve intergenerational equity, but the consultants noted, “There is a distinct lack of clarity in precisely how intergenerational equity is to be defined.” The report also concluded that distributions will likely vary year to year because of the unpredictability of distributions from the SLB’s portion of the fund, and suggested the state consider a rules-based methodology for distributing funds, which is common practice in other states.

Agency staff in charge of overseeing the PSF said the fund is recovering from the economic recession caused by the COVID-19 pandemic. BNY Mellon Asset Servicing presented members a with the fund’s second quarter report, which concurred that markets are improving. That said, the fund underperformed against the PSF benchmark and ranked in the 43rd percentile among peer funds greater than $1 billion for the quarter.

After TEA staff assured members that the fund has met the performance requirements established in law in order to protect the fund’s long-term health, the committee voted to make a distribution of $1.1 billion that will be available to schools for fiscal year 2021.

The board will meet again on Wednesday to discuss and approve items considered in today’s committee meetings. Members are scheduled to meet in person for a more extensive agenda next week.