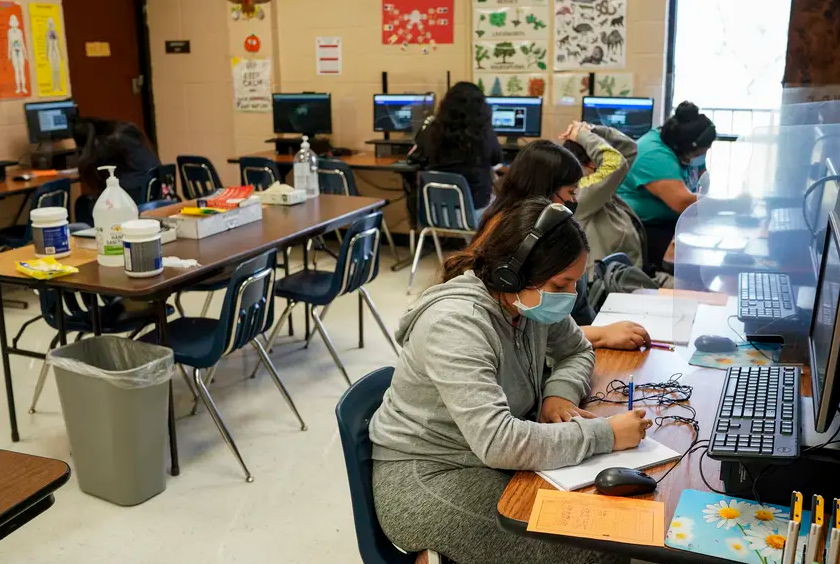 By Ross Ramsey, The Texas Tribune

While the state’s top political performers are talking about books in school libraries, and about whether history teachers ought to be allowed to teach history, Texas schools — schools everywhere, really — are up against a daunting fundamental problem.

Look at what the pandemic has done to our kids.

One way Texas measures academic progress in public schools is with the State of Texas Assessments of Academic Readiness, a standardized test better known as STAAR. Grades took a hit during the pandemic, leaving teachers with the job of pulling students not just to their grade level, but to the performance level they might have had without the long break in in-person, on-site schooling.

In 2019, before the start of the pandemic, 47% of Texas students in third through eighth grade had English and reading skills at or above where they should have been for their grade level. More than half weren’t reading at grade level. And the numbers fell to 43% of those kids by 2021, after more than a year of the pandemic and its disruption of education. Their English skills actually improved, to 54% in 2021 from 50% in 2019. But reading results dropped from 45% reading at grade level to 39%.

The declines in math and algebra scores were pronounced for that age group in Texas public schools. Before COVID-19, 50% were doing arithmetic at grade level; four years later, that had dropped to 35%, based on STAAR scores.

Texas is in its political season. Party primaries were held last month, the runoffs are next month, and the seven-month march to the November general election is underway.

Some candidates in both major parties are talking about falling scores and the learning losses of the last two years, about teacher shortages, school funding, pandemic precautions and so on — the education part of the education conversation.

Others, particularly Republicans, are talking instead about political hot-button issues, like critical race theory, what books are available in school libraries, gender identity, and other cultural and social issues.

It’s enough to make you wonder whether the quality of education is as important as riling up voters in advance of elections.

And what happens in the election often sets the table for the other season of Texas civics — that part after the election when the people who are asking for votes now will turn to the business of setting state policy and making laws.

Public education is at the center of state and local government in Texas, in any terms you choose: time committed, money spent, voter expectations, parent concerns, economic development, jobs, civic engagement and knowledge.

It’s usually a subject where the politicians align on one big idea: The better the state’s education system is, the better the state will be. And even if you get them talking about just the education part of the education puzzle, they have plenty of disagreements. They’re supposed to; their voters don’t agree, either, and the halls of government were built so we’d have a place to debate big ideas.

But first, you have to agree on what needs to be done. The pandemic disrupted education, and the elected class is supposed to get that back in shape, and then to improve it — before the current group of students starts spilling out of public schools without the tools they went there to obtain.

Arguing over hot social topics gets more attention, and that’s why candidates are fond of doing that. But there’s work to be done in public schools — and the schools are something voters hold dear.