As we previously reported here on ATPE's Teach the Vote blog, U.S. Secretary of Education Betsy DeVos, a longtime champion of privatization, has been advocating for federal funding of "microgrants," a relatively new term for a voucher that could be used for private schooling. When Congress passed the Coronavirus Aid, Relief, and Economic Security Act (CARES) Act in late March, which included an infusion of federal cash into an Education Stabilization Fund, it was at best questionable whether Secretary DeVos could use the federal relief funds provided by the act for her "microgrants" pet project. This week, however, it has become clearer that DeVos intends to use the coronavirus pandemic as an opportunity to circumvent congressional approval and plow forward with a publicly-funded voucher plan using CARES Act funds.

On the heels of last week's release of the application for CARES Act funding, the U.S. Department of Education (ED) swiftly announced this week that an additional $180 million would be available to states under a new “Rethink K-12 Education Models” or “REM” grant program. The department pointed to a provision in the CARES Act that allows it to use 1% of the $30.75 billion allotted to the Education Stabilization Fund for "grants to states with the highest coronavirus burden to support activities under the Act." The department's description of the grant program states that it is intended to "address specific educational needs of students, their parents, and teachers in public and non-public elementary and secondary schools." The funding would flow directly to state education agencies, such as the Texas Education Agency (TEA) here in our state, without any requirement that the state agency send the funding on to local school districts. This raises the distinct possibility of CARES Act relief funds being allowed to flow from states to private schools or vendors. 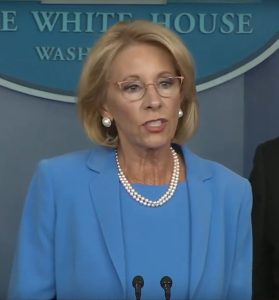 Because this is a new program, DeVos has applied a waiver to the REM grants that allows the department to avoid the need for a national public comment period on the grant proposal. The REM grant application package explains that state education agencies must use the grant money for implementation of "microgrant" voucher programs, statewide virtual learning, or other models of remote learning. Each state must also have the written approval of its governor, but it appears that no public comment will be gathered at the state level either.

Congress clearly intended CARES Act funding to be funneled to states that have faced the greatest challenges as a result of the pandemic. However, ED has announced that in awarding funds under this new competitive grant program, only 40% of an applying state's score will be based upon its "coronavirus burden," which takes into consideration factors such as the number of COVID-19 cases per capita. In a table provided by ED to quantify the coronavirus burden for each state, Texas ranks in the 41st to 60th percentile, behind 22 other states that could apply for the $180 million in REM grants.

Some members of Congress, particularly on the Democratic side of the aisle, have been quick to criticize DeVos for using the coronavirus relief act to fund, without direct congressional approval, other priorities of the secretary and the Trump administration, such as vouchers. Through our federal lobby team in Washington, D.C., ATPE has reached out to our congressional allies to express our concern and opposition to this coronavirus relief program being used for funding either traditional voucher programs or virtual voucher programs. We will be closely monitoring Texas' actions with regard to seeking this money either as a way to fund a statewide voucher program or statewide virtual schools, which have had a dubious track record on fostering student academic achievement. Stay tuned to Teach the Vote for updates as developments unfold.