The Senate Education Committee resumed testimony on the upper chamber's school finance reform legislation Thursday afternoon, April 25, after meeting earlier to discuss the plan and differences between the House and Senate versions.

Much of the testimony Thursday afternoon came from school administrators, many of whom praised differentiated pay programs. One in particular that received high praise from members of the committee is a program utilized by Richardson ISD, after which the SB 1412 campus turnaround section of the committee substitute for Senate Bill (SB) 4 and House Bill (HB) 3 was modeled.

It's important to point out that Richardson ISD's campus turnaround program is a more straightforward differentiated pay program in which teachers are recruited to poorly performing campuses based upon fit and receive additional compensation for voluntarily taking on the challenge of working there. The program uses a multi-measure evaluation system that does not depend heavily on student test scores. Wraparound services for the students are a significant element of the program.

Sen. Kirk Watson (D-Austin) raised a question about the broader merit pay program currently in the Senate’s version of the bill that would allow a small percentage of Texas teachers to earn recognized, exemplary, and master designations that carry additional pay. Sen. Watson asked how the state will be able to make statewide comparisons of teacher performance in order to place teachers into percentiles for the purposes of assigning teacher designations. This goes to the core of the concerns with the merit pay program contained within SB 4/HB 3. While the language establishing eligibility for the merit pay program does offer some local flexibility, it implicitly requires using student test scores to compare teachers across the state. The bill also gives broad authority over the program to the Texas Education Agency (TEA) commissioner, and TEA staff confirmed that the evaluation system would include student assessments.

In response to testimony from a classroom teacher who warned against creating a merit pay program that incentivizes teaching to the test, Sen. Royce West (D-Dallas) noted that it may be worth considering setting an upper limit on the percentage that an evaluation under this system may be tied to test scores. Currently, the commissioner has that discretion. A number of teachers, including some from Dallas ISD, asked committee members not to use test scores to determine teacher pay. They explained that student test results have not been scientifically validated for the purposes of determining teacher effectiveness and warned about the negative campus environment that can result from basing teacher pay on test scores. 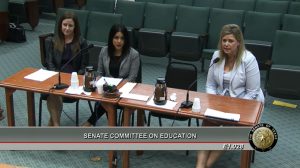 ATPE Governmental Relations Director Jennifer Mitchell testified neutrally on SB 4/HB 3 and provided written input comparing the bills. Mitchell thanked the committee for including a teacher pay raise in the bill, and she offered suggestions for repurposing the money proposed to be spent on merit pay. Mitchell pointed out that the merit pay program in the Senate’s legislation would pressure districts to use STAAR results for evaluations, and suggested legislators put the funding provided in the merit pay program toward the campus turnaround plan or to provide wraparound services.

The committee also voted out the following bills on Thursday: