From The Texas Tribune: Federal officials tell Texas to go beyond plan for special education overhaul

"Federal officials tell Texas to go beyond plan for special education overhaul" was first published by The Texas Tribune, a nonprofit, nonpartisan media organization that informs Texans — and engages with them — about public policy, politics, government and statewide issues. 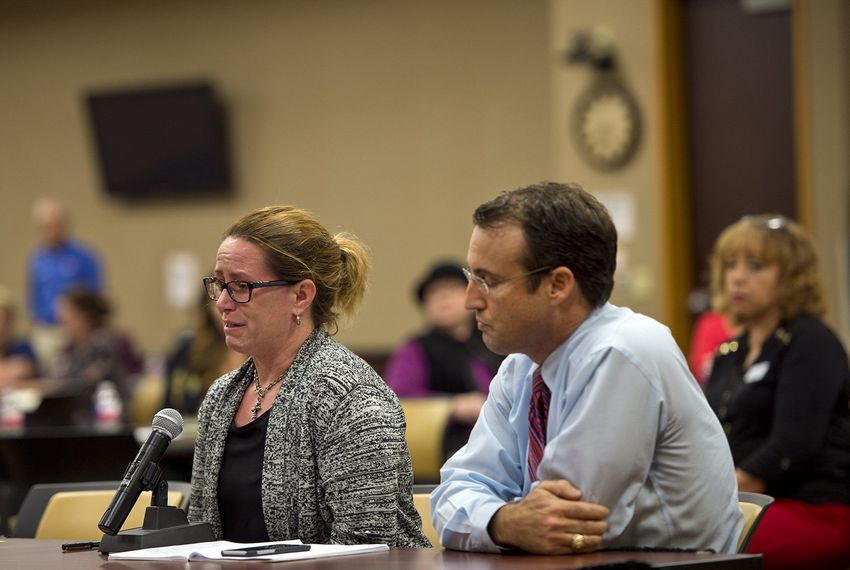 Jean Gearhart gives a tearful statement with her husband Troy Gearhart to the panel about her special needs child. U.S. Department of Education officials held a meeting in Edinburg on their tour of Texas to hear community members' experiences with special education. Photo by Eddie Seal for The Texas Tribune

Federal officials said Texas should be doing even more to improve special education — and they're planning a visit early next year to check.

In a letter Friday, officials from the U.S. Department of Education dissected Texas' proposed plan for overhauling special education for kids with disabilities — in many cases urging state officials to do even more than they had originally planned. Earlier this year, a thorough investigation found Texas had failed to provide students with disabilities with a proper education, violating federal special education law, and demanded it undertake a long list of corrective actions to shape up.

After finalizing a plan in April, the Texas Education Agency has to date dramatically changed the structure of its departments overseeing special education, hired about 40 people to staff them (including a new special education director), and posted a long list of grants totaling more than $20 million to help school districts overhaul their policies. It anticipates spending an additional $3 billion over the next few years as more students enroll in special education.

“TEA has already completed more than half of the required activities in that Corrective Action Response,” Commissioner Mike Morath said in a statement Friday. “We continue to adhere to a commitment to transparency and engagement throughout the plan’s implementation.”

In Friday's letter, federal officials okayed some parts of Texas' improvement plan, which they noted outlines many "necessary steps" the state is taking to address their findings.

But they also said Texas should do more to make sure school districts understand how to comply with federal special education law. The investigation uncovered many educators who misunderstood what the law said about identifying students with disabilities and providing them with the right educational services.

The letter said TEA should take a "representative sample" of school districts and thoroughly review their policies and procedures for identifying students who may need special education. It also should specify how it will identify and hold accountable school districts that do not comply with federal law.

Parent advocates have argued school districts don't make information available to them about how to make sure their children can access the appropriate special education services.

The Department of Education told the TEA to ensure state officials provide information to parents on their rights and responsibilities under federal special education law in their native languages, unless it's "clearly not feasible to do so." The TEA should also come up with a specific process for how it will make sure school districts communicate with families of students who may have been denied special education services in the past, "through means other than postings on websites."

Federal officials plan to review the progress Texas has made and will work with the TEA to schedule an in-person monitoring visit in early 2019.

This article originally appeared in The Texas Tribune at https://www.texastribune.org/2018/10/19/federal-officials-tell-texas-go-beyond-plan-special-education-overhaul/.