Early voting is underway NOW for the November 6 elections, so we’re taking a look at some of the reasons why it’s so important that educators vote TODAY! In this post, we’re taking a closer look at voter turnout.

It may sound funny, but when you cast your ballot this week, you're not just voting for yourself.

You first have to understand that Texas voter turnout is unfortunately pretty abysmal. Even in big election years like the 2016 Presidential Election, only 59 percent of registered voters in Texas actually voted. That’s barely more than half!

In effect, the half that voted made the decision for the half who could have voted, but chose to stay home.

When there’s no race for president, the numbers look even worse – especially when it comes to primaries. Just 10 percent of registered voters participated in the 2018 Republican Primary, while seven percent participated in the Democratic Primary. Turnout for the runoffs that followed ranged between one and three percent. Yikes!!!

Imagine – just one percent deciding races that will affect all 28 million people living in Texas. According to the math, each of those voters would effectively do the choosing for 183 people!!!

Turnout for the last midterm elections in 2014 was just 34 percent, and if turnout is the same this year, then each voter will be speaking for about five other Texas residents. If you don't vote, you don't get to complain! 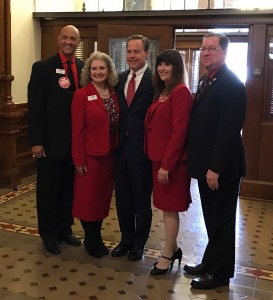 With Texas House Speaker Joe Straus (R-San Antonio) retiring, the first order of business when the next legislature convenes in January 2019 will be for members of the House to elect a new speaker. Will the 150 members elected next week choose a leader who, like Straus, works to increase public education funding and defend kids and classrooms against harmful legislation? Or will they choose someone who will lower the gates to vouchers bills and declare open season on educators?

It all depends on the outcome of this election.

How much so? According to election news website txelects.com, organizations devoted to defunding and privatizing public schools spent more than a million dollars fighting public education allies in runoff races. These groups accounted for more than a third of the $3.3 million total raised by all candidates in the Republican runoffs. Would you spend a million dollars if you didn’t think you’d get something in return?

The people who want to privatize public schools aren't sitting this election out. That means educators can't afford to either.