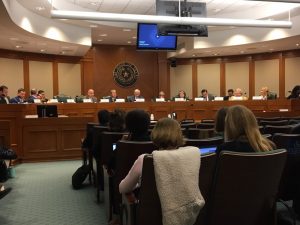 The Texas Commission on Public School Finance met Tuesday in Austin to discuss recommendations for the commission’s report, which is due to the legislature by the end of the month. The initial draft recommendations can be viewed here, and additional resources can be found here.

The draft report includes a recommendation that the 86th Texas Legislature “inject significant additional annual state revenue” through new strategic allotments and weights outlined in the commission’s report, including about $1.7 billion in specific areas. The report adds that for the purposes of new funding, members should note that an increase of $500 million in state funding is equal to a roughly 0.9 percent increase over the last budget biennium. This would be formula funding, targeted at the neediest studies, and tied to specific outcomes.

Commission Chair Scott Brister voiced reservations, suggesting that asking the legislature for significant additional funding is not the commission’s job. He later clarified that his chief opposition was to placing a dollar figure on additional funding. Several members pushed back, including House Public Education Committee Chair Dan Huberty (R-Houston), who said he would not sign a report that does not call for additional school funding.

The commission is recommending a high-quality teacher allotment, initially funded at $200 million, for districts wishing to offer differentiated compensation to pay their most effective educators higher salaries sooner in their career. This would be contingent on districts creating locally-developed, multi-measure evaluation and compensation systems based on an outline created by the legislature. This includes the state setting a goal that top teachers have a path to a $100,000 salary and incentivizing districts to assign top teachers to the most challenging campuses.

Finally, the draft report calls for statutorily increasing the basic allotment, though it does not specify a specific amount. It calls for increasing the yield on “copper pennies” and compressing the rate in order to provide tax relief, as well as reducing the role of recapture in the school finance system. The report makes no recommendations regarding special education, instead suggesting that the current corrective action plan approved by the U.S. Department of Education should be completed before any additional reforms are discussed.

Discussing the commission’s major findings, Brister acknowledged that schools are being asked to do more than ever before. This includes higher security standards and providing for the physical and mental well-being of students in addition to educating them. He then asked to strike language from the report that says the state has failed to adequately fund public education.

After breaking for lunch, the commission returned for more in-depth discussion on individual recommendations. Commission member Todd Williams of the Commit Partnership in Dallas pointed out that the teacher compensation portion of the plan (Section D) does not include specific funding for strategic staffing such as that implemented by the Dallas ISD ACE program, which is intended to incentivize top teachers to teach at the highest-need campuses. Williams argued the evaluation system and strategic staffing system should be treated as separate and funded accordingly.

State Sen. Paul Bettencourt (R-Houston) then laid out the recommendations from the working group he chaired on revenues. The group’s primary recommendation is to adopt Gov. Greg Abbott’s plan to cap local property tax revenue growth. The plan suggests capping growth at 2.5 percent annually, and replacing revenue lost by school districts with state funding. The governor’s office does not specify how much this would cost or from where the replacement funding would come.

Texas Education Agency (TEA) Chief School Finance Officer Leo Lopez presented a chart addressing the three plans endorsed by Bettencourt’s group, which suggests that the governor’s plan would reduce local maintenance and operations (M&O) tax collections by nearly $1 billion and increase school district revenue by $300 million in 2020 at a cost of roughly $1.3 billion. By 2023, the governor’s plan is projected to reduce M&O tax collection by $3.7 billion while increasing school district revenues by $74 million. Lopez pointed out that this is primarily a tax relief plan, as opposed to a school finance plan, which explains why future funding is projected to flatten out.

Sen. Bettencourt has argued that the state’s coffers will be flush heading into the next budget cycle based on tax revenue from booming oil and gas production, but the state comptroller has yet to release a formal biennial revenue estimate (BRE) with hard numbers upon which to base a budget. State Rep. Ken King (R-Canadian), who represents oil and gas-dependent west Texas, cautioned against relying on oil and gas as a reliable, long-term funding source. A combination of the governor’s plan and the commission’s recommendations for additional public education spending could add up to a price tag north of $5 billion for the upcoming budget biennium.

The commission is scheduled to meet next Wednesday, Dec. 19, 2018, to vote on final recommendations. The commission is required by law to submit its report to the legislature by December 31.