The Texas Commission on Public School Finance met Wednesday for the final time to unanimously approve the final recommendations and findings to be included in the commission’s final report due to the Texas Legislature by December 31. 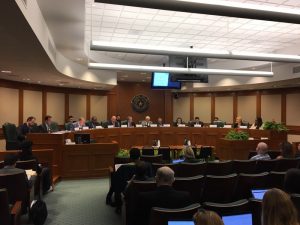 Members were appointed in the fall of 2017, but the commission did not meet until January 2018. Members heard roughly 80 hours of testimony from more than 150 witnesses, including ATPE. Progress on the final report had been stalled awaiting the product of a working group on revenues led by state Sen. Paul Bettencourt (R-Houston).

The final report contains 34 separate recommendations, which members spent hours wordsmithing Wednesday. Chair Scott Brister, who was appointed by Gov. Greg Abbott, resisted wording that would have called for “adequate” school funding or described current funding levels as “inadequate.” The chair’s suggestions centered on insulating the state against any potential for future school finance litigation, while other members of the commission argued for more explicit and specific funding increases.

Changes to the final draft considered on Wednesday included a new section containing significant and previously undiscussed suggestions for the construction of local teacher evaluation systems for implementing the differentiated pay program proposed by the commission. The suggestions outline the required components of district plans, which include student achievement as determined by test scores, administrator observations, and student perception surveys. Furthermore, the suggestions included minimum percentages for each category, requiring test scores to account for a minimum of 25 percent of an educator’s overall evaluation rating.

ATPE successfully lobbied for the commission to remove the percentages from its final report in order to avoid starting the legislative conversation with artificially predetermined weights for each of the recommended components. Despite the language in the report labeling these components as mandatory, they will in actuality serve as the starting point for bills that will be drafted and debated when the 86th Texas Legislature convenes in January. The same goes for all of the recommendations contained within the commission's report.

The full report is titled “Funding for Impact: Equitable Funding for Students Who Need It the Most" and can be found here. ATPE responded to the final report with a press statement, which recommends the following additional considerations in light of the report:

“ATPE appreciates the long hours devoted by commission members to researching the complexities of school finance and listening to the many concerns by our association and other stakeholders,” said ATPE Executive Director Shannon Holmes.

In particular, ATPE members have expressed gratitude for those who stood up for Texas students during the commission’s deliberations by arguing for the inclusion of additional public education funding. State support for public education has been inadequate to fully overcome the growing list of challenges that Texas schools face. How to address these challenges became a key issue during the 2018 election cycle.

“Texas voters have sent a strong message,” said Holmes. “The state must do a better job funding our schools, and Texans will no longer accept excuses for failing to act.”

ATPE looks forward to forging real solutions on school finance when the 86th Texas Legislature convenes in 2019. The association pledges to continue working with legislators to implement policies that will benefit all 5.4 million Texas schoolchildren.