The Texas State Board of Education (SBOE) kicked off its September meeting Wednesday with an update from Texas Education Agency (TEA) commissioner Mike Morath regarding the agency’s response to Hurricane Harvey. 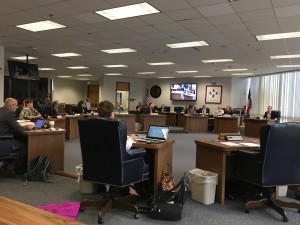 The commissioner described the storm that smashed into the Coastal Bend as a category four hurricane as “pretty nasty.” More than 1.4 million students (roughly 1 in 4) attend school in one of the 58 counties designated under Governor Greg Abbott’s (R-Texas) state disaster declaration.

According to the agency, a majority of those districts have reopened or will soon reopen. Districts facing longer delays include Ingleside, Taft, Aransas County, Aransas Pass and Port Aransas in Education Service Center (ESC) Region 2 (Corpus Christi). In Region 3 (Victoria), Refugio ISD remains closed and Woodsboro ISD could possibly reopen by September 18. Houston ISD in Region 4 is implementing a rolling start for campuses, and Sheldon ISD is looking to reopen September 18. Finally, eight districts in Region 5 (Beaumont) are still determining potential start dates.

Commissioner Morath said the agency has been “feverishly busy” trying to support affected districts and charters, noting the invaluable role played by the education service centers play. The commissioner has conducted daily “war room” sessions with agency staff, and waived a number of state education laws under the agency’s purview. Those include a waiver for missed instructional days, adjustments for average daily attendance (ADA), submitting crisis code data and changing the PEIMS school-start window, reducing the minimum days of service and extending various deadlines. The commissioner has met with superintendents in Houston and is scheduled to meet with superintendents in Corpus Christi, Victoria and Beaumont.

Morath called Governor Abbott’s recovery efforts “quite remarkable,” and credited the governor with negotiating fund matching that would enable the Federal Emergency Management Agency (FEMA) to cover 90 percent of recovery costs, leaving local districts responsible for the remaining ten percent. Between FEMA funds and insurance, the commissioner suggested districts and charters should be able to cover recovery costs without any additional money out of pocket. That said, Morath noted the storm “was not without cost,” and praised those who contributed “many small acts of heroism” to save lives in immediate aftermath.

In Houston, Morath said 35-40 schools quickly became makeshift shelters for storm victims. Many educators became first responders, including a Spring Branch teacher and ATPE member who joined the “Cajun Navy” rescue efforts. Praising the work of educators, Morath said, “What we saw was public service on an epic scale.”

The agency has set up a hotline (512-463-9603) for parents who aren’t sure what to do with their children after being displaced by the storm. Additionally, staff advised the board that approximately 340 individuals were scheduled to take the high school equivalency exam but were prevented from doing so due to the storm. Because board rules do not allow the state to provide refunds, the agency has asked test vendors to waive the administrative fee for those retaking the test. Agency staff advised that this would accomplish the same goal without requiring the board to amend rules.

Member Barbara Cargill (R-The Woodlands) noted that the College Board is waiving SAT fees for those affected by the storm. Cargill also raised a question about how the storm would affect the schedule for STAAR test administration. The commissioner indicated that the agency is unable to alter the schedule, therefore the STAAR will be administered according to the normal timeline.

Responding to a question from Member Pat Hardy (R-Fort Worth), Morath indicated that the agency has broad authority to tap additional funds in response to a national disaster. Such a move could be done with or without dipping into the economic stabilization fund (ESF), often called the “rainy day fund.” Morath suggested tapping emergency funds could be done without the need for a special session, although it could present legislators with budget challenges in the next legislative session.

Members breezed through a new vendor’s proposal for a Mexican-American studies textbook, after a previous vendor’s offering generated controversy and resulted in the board declining to endorse the book. The board opened up discussions on aligning the education code to accommodate new courses created in statute by the 85th Texas Legislature, including advanced computer science, cybersecurity, and interaction with law enforcement officers. Prompted by an individual who spoke during public testimony, members engaged in a spirited discussion about the relative merits of personal financial literacy and economics. Some members indicated they would be open to a future discussion that would ponder placing more emphasis on personal financial literacy than on economics – which is among the courses eligible for college credit.

The governor signed legislation in May that removes sequencing requirements for English and math. Senate Bill (SB) 826 eliminated the requirement that advanced English and math courses be taken only after the completion of English I, English II, English III, Algebra I and geometry as appropriate. The legislature also passed legislation that will allow certain computer science courses to satisfy the requirement for students to take a language other than English. The board devoted significant discussion time Wednesday contemplating how to credit computer science courses that may satisfy either a language or a math requirement, and whether such courses should be allowed to count as satisfying both requirements. The board will face several such decisions over the next few months as it determines specifically how to enact certain legislative changes.

The board heard from representatives from the International Baccalaureate program Wednesday afternoon who voiced concern about a lack of PEIMS codes for IB courses. The conversation will continue over the next few meetings in which the board will likely undertake a deeper dive into IB coursework.

The meeting concluded with an update on the review process for Texas Essential Knowledge and Skills (TEKS). Members received an updated cycle for review and revision, and a recommendation from agency staff that the board delay the upcoming social studies TEKS review by one meeting in order to accommodate those who may have been affected by the storm.