Here's your "Friday the 13th" edition of our weekly education news highlights from ATPE:

The Texas Education Agency (TEA) also released guidance this week regarding transportation in the wake of the storm. In some cases, districts may be required to provide transportation between districts. The agency guidance indicates that these costs may be covered by Foundation School Program (FSP) funds.

The committee charged with overseeing public education policy convened for a day-long meeting, and took testimony from Education Commissioner Mike Morath and several superintendents from affected districts. The committee discussed ways to provide both short-term and long-term relief for districts, and vowed to look at ramifications for the state school accountability system in the coming weeks. This report by ATPE lobbyist Mark Wiggins recaps the committee's work this week.

The 2017 legislative session saw the lengths to which some in the Texas Capitol are willing to go in order to weaken the teaching profession. At the same time, it showed the power Texas educators can wield when we work together to defend our students and public schools. The March 2018 primary and November 2018 general elections will be prime opportunities for educators to show up and make our voices count. This is why ATPE has partnered with other public education supporters through Texas Educators Vote to make teachers the biggest voice in 2018.

The idea is simple: If 100% of educators vote, we can change the outcome of elections. The people you elect decide: 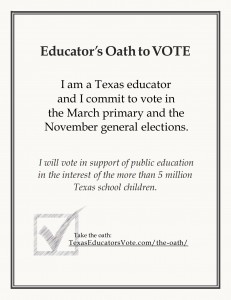 Visit the Texas Educators Vote website today and sign the oath that you will vote in the March primary AND the general election in November. Texas is at the bottom of the heap when it comes to the percentage of registered voters who actually show up to vote. Teachers can change that. Educators of all political stripes are coming together through Facebook groups like Texans for Public Education and organizations such as Friends of Texas Public Schools. Together, we can make a difference!

Your ATPE Governmental Relations staff is on the road again this weekend visiting regions that have requested a speaker to provide a Capitol update. Staff will be attending meetings in Region 4 and Region 16, with more visits on the calendar. There's plenty to talk about, so be on the lookout for a region meeting near you!