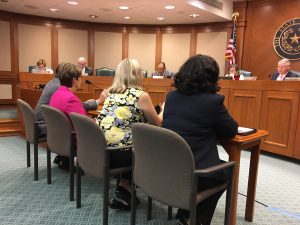 The House Public Education Committee met Tuesday morning, Nov. 14, in Austin to hear from educators about the effects of Hurricane Harvey on the public school accountability system, including testimony from ATPE member Paula Franklin from Pasadena. The hearing focused on the following interim charges set by Texas Speaker Joe Straus (R-San Antonio):

Chairman Dan Huberty (R-Humble) gaveled the committee together Tuesday to hear from teachers, administrators and state agency staff. Texas Education Agency (TEA) Commissioner Mike Morath testified that a survey of school districts showed roughly two-to-one in favor of keeping the current test administration dates unchanged. Morath suggested waiving tests altogether would violate both state and federal laws, and would hinder the ability to track student performance. The commissioner indicated a decision whether to delay the testing schedule would be forthcoming within the next two weeks.

Morath listed a number of disruptions experienced by students affected by the storm, including displacement and homelessness, instructional setting disruption, and disruption of staff. The commissioner suggested these three categories of disruption will be factored into decisions how to address accountability in individual affected districts, which could be modified through the agency’s rulemaking authority.

“Is this the most effective way to help kids? Or is there a more effective way?” asked state Rep. Linda Koop (R-Dallas), noting impacted students and staff are already under enough stress before factoring in test-based accountability.

Morath suggested a one-year accountability waiver for affected districts could jeopardize federal funding, which accounts for roughly ten percent of the state’s overall public education budget. The percent of federal dollars directly tied to testing is in fact much less than that. Rep. Koop pointed out TEA issued a “non-rating” for West ISD after a fertilizer plant explosion devastated the Central Texas town. While acknowledging this precedent, Morath warned such measures could delay state interventions for districts with failing campuses. Chairman Huberty requested Morath formally ask for a federal testing waiver for districts affected by Hurricane Harvey.

On the financial side, Chairman Huberty voiced complaints raised by districts that have still not received replacements for textbooks lost in the storm. State Rep. Gary VanDeaver (R-New Boston) chided the agency for not being a more proactive advocate for such districts. The agency set up a portal to allow other districts to donate textbooks, but some districts continue to wait for needed instructional materials. Morath testified this is a cash flow issue, which the agency doesn’t have the authority to adjust. At the chairman’s request, the commissioner agreed to poll districts on outstanding needs and explore ways to provide a one-time purchase.

The commissioner testified that the agency does not have the authority to order automatic reappraisal of property values in districts affected by the storm, but indicated that the state could shoulder the cost of reappraisals. Whether such a reappraisal would be beneficial appears to vary from district to district. Finally, Chairman Huberty requested TEA keep tabs on facilities damage not covered by insurance and FEMA for the purpose of submitting a supplemental appropriations request for the 86th Texas Legislature.

Considering the level of trauma caused by the storm, Alief ISD Superintendent H.D. Chambers suggested that testing in affected districts may not necessarily yield useful data. Chambers testified that whether or not assessments are waived, the agency should think twice about how that data is used, in particular with regard to accountability in the short term.

“Right now we’re dealing with issues that accountability doesn’t have the capacity to account for,” said Chambers.

Galveston ISD Special Education Instructional Specialist and ATPE member Paula Franklin shared her own community’s experience before the committee. Franklin described the catastrophic damage to teachers’ homes caused by the storm, and testified that some teachers are putting off needed repairs over fears of missing class and the negative consequences of the state accountability system. Additionally, Franklin suggested that districts would be unlikely to risk federal dollars under the Individuals with Disabilities Education Act (IDEA) are untethered to testing requirements, and would likely be safe in the event of a dispute between the state and federal government over accountability.

While noting that some tests continue to serve a purpose, panelists overwhelmingly voiced concerns over the negative consequences of holding students impacted by the storm to the same accountability standards as those who were unaffected. Chambers pointed out that the issue is compounded by the fact that administrators are already dealing with the rollout of a complex new “A through F” accountability system, and suggested the state consider potential accommodations on a year by year basis. Chambers emphasized, “I just think the stakes are too high.”

Chairman Huberty pointed out there is already precedent for holding certain districts harmless from state accountability ratings from 2006, following Hurricane Katrina. He suggested the precedent will likely be cited in a letter from the committee addressed to TEA in the next few weeks. Chairman Huberty indicated that the committee’s next interim hearing will be in the first quarter of 2018.