On Tuesday, March 21, the Senate Education Committee will hear Senate Bill (SB) 3, a voucher bill by the committee's chairman Sen. Larry Taylor (R-Friendswood). The bill is among the lieutenant governor's highest priorities to pass this legislative session, and educators are being urged to contact their senators to oppose this bill. ATPE members can use our communication tools at Advocacy Central to quickly message their senators about this bill.

As reported by ATPE Lobbyist Kate Kuhlmann in a blog post earlier this week, SB 3 has been called a “school voucher on steroids,” because it authorizes both Education Savings Account (ESA) vouchers for parents to spend on their children's home or private schooling and tax credit scholarships to pay for private schools. To learn more about the dangers of these two programs, check out ATPE Lobbyist Monty Exter's recent analysis of the bill here.

The Senate Education Committee had originally planned to hear SB 3 this week, but the voucher bill was postponed to next Tuesday. During yesterday's hearing, the committee instead heard testimony on three bills pertaining to reporting on counselors, the use of epinephrine auto-injectors (epi-pens) in private schools, and the sequencing of high school math and English courses. ATPE supported SB 490 that requires districts to report the number of school counselors providing counseling services at a campus, which is aimed at collecting data on counseling in order to better understand the role counselors play on a campus. 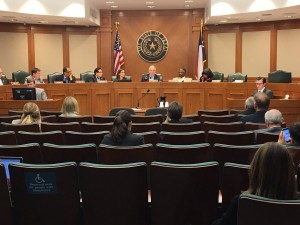 On Tuesday, March 14, the House Public Education Committee heard a number of bills, as reported by ATPE Lobbyist Mark Wiggins in a blog post this week. ATPE weighed in on a number of the bills that included such subjects as curriculum standards, pre-kindergarten programs, and the school start date. Next week, the committee's Subcommittee on Educator Quality will meet Monday, March 20, to consider bills pertaining to educator misconduct, certification, and the importance of high-quality mentoring for new teachers. The full committee's hearing on Tuesday, March 21, will cover two dozen bills, including a number of measures aimed at changing the state's accountability system. The highest profile bill on that list is House Bill (HB) 22 by the committee's chairman, Rep. Dan Huberty (R-Kingwood) to modify the controversial "A through F" accountability grading system. The committee also plans to resume its discussion of the chairman's school finance reform bill, HB 21.

Also this week, Congress got its first formal look at President Trump's proposal for the next federal budget. As expected, the 2018 budget proposal includes significant cuts to education funding as a whole and significant increases to initiatives preferred by the president. Trump's plan includes an overall $9 billion in cuts to the U.S. Department of Education while a total of $1.4 billion would be added to fund charter school expansion, Title I funding portability, and likely vouchers. Read more about President Trump’s budget proposal as well as the latest developments involving the Every Student Succeeds Act (ESSA) in ATPE Lobbyist Kate Kuhlmann's most recent federal update blog post.   As the both chambers of the 85th Legislature continue to work on their respective budget proposals, the full Senate Finance committee met this week to adopt the suggestions of its subject area work groups, including the Article III work group on public and higher education. The full Senate Finance Committee cut an additional 276 million net dollars in programmatic and grant funding out of the Texas Education Agency (TEA) budget. Those cuts are in addition to programmatic cuts not related to the Foundation School Program (FSP) already found in the Senate's base budget bill as filed. The largest cuts were a net cut of $140 million from non-formula pre-K funding, $104.6 million out of the Instructional Materials Allotment, and $47.5 million from the New Instructional Facilities Allotment. The cuts to all other programs in TEA’s budget totaled approximately $37 million and included things like substantial cuts to the Math and Reading Academies.

The Senate did add dollars to some TEA programs above its introduced budget. The additions totaled approximately $50 million and included items like $25.2 million for the E-rate program that will draw down a $250 million federal match to provide broadband to school districts currently lacking it; $391,000 on two additional investigators and one support staff member to address cases of inappropriate relationships between educators and students investigated by TEA; and $10 million restored to the Student Success Initiative, which had been zeroed out in the introduced budget.

While TEA program and grant funding took the largest cuts ($276 million) this week, TRS got the biggest boost, a net increase of $290 million over the Senate's introduced bill after additions and cuts. The Senate added $316 million in funding for TRS-Care contingent on the passage of legislation that makes significant structural changes to the retiree healthcare plans.

Meanwhile, the House adopted very few changes to its version of the proposed public education budget this week, but did adopt one very important contingency rider. That rider would allow an additional $1.47 billion of General Revenue to be appropriated to the FSP; for the Basic Allotment to be increased from $5,140 to $5,350; and for implementation of a statutory FSP payment deferral in fiscal year 2019 which reduces the cost of the budget by $1.87 billion. The rider is contingent on the passage of school finance legislation such as Rep. Dan Huberty's HB 21 plus a bill that would enact the FSP deferral. ATPE has advocated for such a deferral to help address budget deficits this session.

Related: Read a recently published op-ed by ATPE Executive Director Gary Godsey, in which he urges lawmakers to consider using the state's rainy day fund to address imminent education funding needs. Also check out this Spectrum News story in which ATPE Lobbyist Monty Exter is interviewed about the Senate's proposed pre-K cuts.   In other news this week: The Texas Senate passed another of Lt. Gov. Dan Patrick's legislative priorities through Senate Bill (SB) 6. The controversial bill by Sen. Lois Kolkhorst (R-Brenham) to regulate bathroom usage policies of school districts and other governmental entities was approved by a vote of 21-10, despite considerable public opposition to the measure.

Among the flurry of new bills filed just before last Friday's deadline for lawmakers to submit new legislation were two TRS-related bills that have caused a minor stir on social media. Sen. Paul Bettencourt's (R-Houston) SB 1750 and SB 1751 revive the concept of converting the TRS defined-benefit pension plan in the future to a defined contribution program, more like a 401(k) plan, or a hybrid of the two. The first bill calls only for an interim study of the idea, while the second bill would authorize TRS and ERS (the agency overseeing a similar pension plan for state employees) to create such a program as an alternative for new employees. At this point, there are no indications that SB 1751 will gain traction this session when lawmakers are much more focused on the funding challenges associated with the TRS healthcare programs. ATPE Lobbyist Monty Exter was interviewed about the bill this week by Spectrum News.

The Senate also voted unanimously this week to confirm Donna Bahorich's continuation as chair of the State Board of Education (SBOE). Bahorich was first elected to the SBOE in 2012, and she has held the role of board chair, a gubernatorial appointment, since 2015. Commissioner of Education Mike Morath was also confirmed.

Are you following ATPE's Governmental Relations team on Twitter?