Two bills staunchly opposed by the education community are likely to be heard by the full Texas Senate as early as Wednesday, March 29. The voucher bill, Senate Bill (SB) 3 by Sen. Larry Taylor (R-Friendswood), and Sen. Joan Huffman's (R-Houston) SB 13, which would eliminate educators' rights to use payroll deduction for their association dues, both landed on the Senate's Intent Calendar this week. Under current Senate rules, three-fifths of the senators present must still vote to allow the bills to be debated.

SB 3 has been identified as one of Lt. Gov. Dan Patrick's top three priorities for the 85th Legislature. It creates two forms of private school vouchers: a corporate tax credit for funding scholarships to private schools and an Education Savings Account (ESA) program that gives parents public funds to spend on their children's home or private schooling expenses. ATPE members have long opposed all forms of vouchers for many reasons, not the least of which is the fact that private and home schools are unregulated and would not have to account for how they spend those public tax dollars. 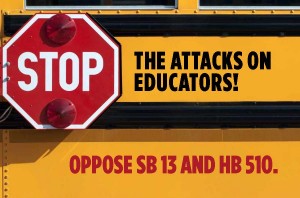 The payroll deduction bill, SB 13, is also on the lieutenant governor's broader list of legislative priorities this session. Often referred to by its backers as a bill dealing with "union dues," the bill primarily targets educators by taking away their right to deduct voluntary association dues payments from their paychecks. ATPE members make up one of the largest groups of public employees negatively affected by the bill, even though ATPE is not affiliated with any national labor unions, exists only in Texas, supports small business and the right to work, and opposes union-favored tactics such as collective bargaining, strikes, and work stoppages.

SB 13 specifically carves out exceptions for police officers, firefighters, and EMS workers who use payroll deduction for their dues to associations and even unions that collectively bargain. Those distinctions between classes of public employees have angered many in the education community and even some lawmakers.

Educators and other critics of the bill have also disputed false claims that "taxpayer resources" are being spent on the collection of union or association dues, since there is no evidence of any cost to taxpayers resulting from offering school employees the convenience of payroll deduction that is already used for a host of services, purchases, and donations.

Despite the growing opposition to SB 3 and SB 13, the House's lack of appetite for wasting time on political battles, and the gaping holes in the logic behind these measures, Gov. Greg Abbott has voiced support for both of these pieces of anti-public education legislation. Reports surfaced today that backers of the voucher bill are planning to introduce substitute language on the Senate floor that will reduce the bill's hefty fiscal note and attempt to garner support from some rural Republican senators who have voiced concerns about SB 3. Even if the Senate advances the highly controversial bill, leaders in the House have called the voucher legislation "dead." Also today, members of the law enforcement community voiced complaints that the anti-educator SB 13 will similarly harm some members of the law enforcement community, too. On Twitter, an advocacy organization representing police officers said that they had been "publicly misled" about the bill's impact, noting that it will also prevent thousands of school resource officers from deducting their dues payments:


ATPE's positions on these and other bills are guided by the ATPE Legislative Program adopted by ATPE members every year. ATPE members believe that private school voucher legislation like SB 3 is an irresponsible waste of taxpayer resources. This is particularly true now, when public schools have struggled to recover from massive budget cuts in recent years, state appropriations have lagged, and local taxpayers have been forced to bear an unwieldy share of the funding burden for public education through property taxes while the state's share of the funding has declined steadily.

ATPE has opposed SB 13 and similar bills that would take away educators' payroll deduction rights, especially when other public employees would continue to enjoy those rights. Allowing educators to deduct their association dues results in no additional cost to taxpayers, and the bills are widely regarded as politically motivated efforts to weaken educator associations and lessen their future influence over other types of education legislation, such as voucher bills.

ATPE encourages educators to contact their senators about both SB 3 and SB 13, urging them to oppose these bills. ATPE members can visit Advocacy Central to find contact information for their lawmakers along with quick and easy tools for communicating with them.
Previous
Next