On Wednesday, March 29, the full Texas Senate took up Senate Bill (SB) 13 by Sen. Joan Huffman (R-Houston) to prohibit educators and a few other groups of public employees from using payroll deduction for their voluntary association dues. The ATPE-opposed bill prompted two hours of robust floor debate before senators voted to approve the bill on second reading by a party line vote of 20 to 11. ATPE thanks those senators who voted against SB 13 and especially those who spoke so eloquently on behalf of the education community during the debate. 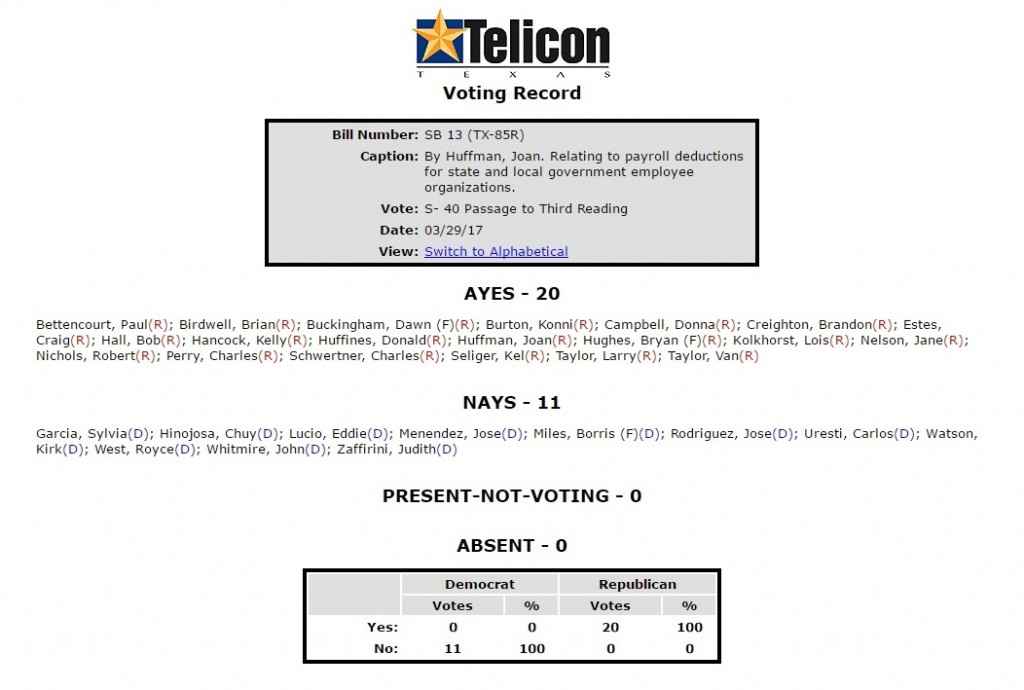 Eight floor amendments were considered, but the only one added was by the bill's author, Sen. Huffman, to allow school resource officers to continue to have their association and union dues deducted. As we reported Tuesday, representatives of the law enforcement community took to social media on the eve of the debate complaining that Sen. Huffman had misled them about all law enforcement personnel being exempted from SB 13. As passed out of the Senate State Affairs Committee, the bill would exempt most police, fire, and EMS personnel, but police officers employed by a school district would lose their dues deduction rights. Huffman, who chairs the State Affairs committee, corrected that by adding a floor amendment Wednesday to exempt school resources officers from SB 13, too.

Several Democratic senators filed floor amendments to try to exempt more public employees, such as educators and CPS workers, from the bill so that they could continue to take advantage of the convenience of payroll deduction. ATPE was mentioned several times during the debate, with some senators reading excerpts from a letter that ATPE had sent to all legislators opposing the bill and several references to ATPE members who testified during the committee's Feb. 13 public hearing.

However, Sen. Huffman objected to any expansion of the first responder exemptions in her bill and moved to table each of the amendments. Responding, for example, to an attempt by Sen. Royce West (D-Dallas) to exempt educators from the bill by characterizing them as "first responders," too, Huffman continued to draw a distinction, arguing that teachers "don't put their lives on the line" every day when going to work.

All floor amendments except Huffman's own were voted down on the same 20 to 11 party line vote. 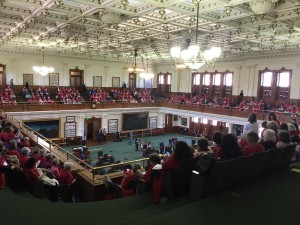 Ironically, the Senate's vote on the anti-educator payroll deduction bill took place only hours after the Senate had recognized retired teachers who were sitting in the gallery and visiting the Capitol for their association's lobby day yesterday. Many of the senators who spoke about their love for teachers and how much their own lives had been shaped by teachers in public schools were the same senators who only hours later voted for SB 13 in an obvious attempt to weaken the associations that advocate for teachers every day.

Asked about the political motives behind her bill, Sen. Huffman defended her love for teachers and claimed that "lobbyists" and the media were responsible for all of the misleading rhetoric against SB 13. She stated that she hoped educator associations like ATPE would find creative ways to work around the payroll deduction prohibition in the future to accommodate members who are unable to pay their dues in a lump sum or with a credit card or checking account debit. Pressed further by her Democratic colleagues to explain what the policy rationale was for SB 13, Sen. Huffman would merely say that the bill would address "inefficiencies" by getting the government out of the business of collecting dues.

Most of the debate centered around Huffman's controversial decision to exclude certain groups from the bill, apparently based on the nature of their political activities. The author of SB 13 stated multiple times that she was not comfortable allowing public employee groups that "harass employers" to benefit from payroll deduction, but she could not cite a specific example of such harassment. 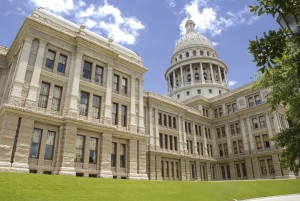 With SB 13 being approved on second reading, the Senate will still have to take another vote on the bill for final passage, which would send it next to the Texas House for its consideration. That Senate vote on third reading is likely to take place today, and a similar vote outcome is anticipated.

The Senate is also planning to consider SB 3, the lieutenant governor's high-priority private school voucher bill, on today's calendar. Stay tuned to Teach the Vote for updates and be sure to follow us on Twitter for real-time developments.