As expected, and as has become customary in the committee on voucher legislation, the meeting kicked off with invited testimony from voucher proponents flown in from across the country. The hearing continued for roughly ten hours as witnesses testified and senators asked questions related to the bill and testimony.

ATPE Lobbyist Monty Exter testified against SB 3 on behalf of ATPE, beginning his testimony by pointing to a long standing anti-voucher position in the ATPE Legislative Program that member educators amend and vote on annually. Exter told senators that there is plenty legislators could do to help Texas education, particularly the disadvantaged and minority students that proponents hail as winners under a voucher program, but that establishing a voucher program is not one of them. Rather, the vast majority of disadvantaged students would suffer the most under a voucher program. 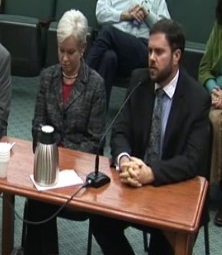 In highlighting only a few options senators could focus on instead of vouchers in order to help poor and minority students, Exter pointed to updating formulas that currently fail to adequately direct money to the kids who need it most and cost the most to educate (such as English language learners and students with special needs), fully funding a bilingual education program, and reinstating support for the math and reading academies that resulted in big educational impacts on students at the bottom of the education gap. Exter also highlighted the costs associated with vouchers that senators are failing to consider. He told the committee that in addition to the money that will be taken out of the public school system due to student movement to other education options provided to them through vouchers, the much greater cost would come in subsequent years, when children not currently of school age become eligible without having ever stepped foot in the public school system.

Under SB 3, any child currently of school age must first spend a year in the public school system; if their parents determine the public school doesn’t meet their needs, those students can opt for a voucher. However, children who reach school age in the coming years wouldn’t be required to ever try a public school. Some 600,000 parents currently educate their children in a home or private school setting in Texas, which means many parents would have access to public funds they could use to supplement their child's non-public education in the future.

The fiscal note, which estimates the impact a bill would have on the state budget, for SB 3 was released yesterday in connection with the hearing. Surprisingly, the number used to calculate the impact was based on merely 25,000 Texas schoolchildren choosing vouchers, resulting in a negative impact to the state of more than $300 million. That is a usage rate of less than one percent, a percentage lower than the usage rates in states that already have vouchers. For instance, it was mentioned during the hearing that Indiana has a usage rate of closer to 3%; at that rate we would be talking about a hit to Texas education funding in the billions, not millions. Using the rate of 5%, the Center for Public Policy Priorities estimates a negative impact of $2 billion to the state coffers.

Yesterday's voucher hearing took place on the heels of stunning news reports about legislators receiving fake letters in support of SB 3. As reported by our friends at The Texas Tribune, a few rural lawmakers called their constituents who were identified as purported senders of the letters and learned that some of them had no knowledge of the letters being sent in their names and were, in fact, opposed to the voucher legislation.