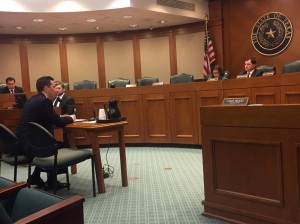 ATPE lobbyist Mark Wiggins testified on the bill, stating concern that the requirement to disclose potentially false accusations would have a chilling effect on the career prospects of unfairly accused educators. Like most bills relating to improper relationships between educators and students, HB 218 would mandate continuing education in understanding appropriate relationships, boundaries, and communications between educators and students. It would also require districts to adopt written electronic communication policies designed to prevent improper communications between school employees and students.

HB 1469 by state Rep. Ernest Bailes (R-Coldspring) would allow open-enrollment charter schools to hire a teacher without a baccalaureate degree for a noncore academic career and technical education course if they have experience in the related field and receive at least 20 hours of classroom management training.

HB 972 by state Rep. Helen Giddings (D-DeSoto) would make it more difficult for districts to assign students to an uncertified teacher. ATPE supports this bill.

HB 816 by House Public Education Committee Vice-Chair Diego Bernal (D-San Antonio) would create a mentor program for new teachers in Texas. Texas has a history of successful, if short-lived, mentor programs that have reduced teacher attrition and improved student performance. Studies have shown up to half of educators leave the profession within the first five years, and teacher attrition costs Texas between $200 million and $500 million each year.

ATPE lobbyist Mark Wiggins testified in support of HB 816, pointing out the success of prior initiatives dating back to the 1990s. The Texas Beginning Educator Support System (TxBESS) was a $12 million pilot program launched in 1999, which provided support, training, assessment, and $400 per year stipends for roughly 2,000 program participants. Eighty-eight percent of teachers returned after the first year, well over the 81 percent state average for non-TxBESS teachers. After the second year, 98 percent of that cohort continued to teach. Principals reported TxBESS improved teacher performance, with minority teachers and high school teachers showing the most improvement. Funding for TxBESS expired in 2002. In 2006, the Texas Legislature created the Beginning Teacher Induction and Mentoring (BTIM) program with an initial $15 million per year appropriation. Mentor teachers received up to $750 per year stipends, and districts reported 30 percent increases is new teacher retention. Funding for BTIM expired in 2012. In 2013, the Texas Legislature commissioned a study on mentoring by the Teacher Mentoring Advisory Committee (MAC). The committee released its final report in 2015, and HB 816 seeks to implement its recommendations.

Bernal’s bill would allow schools to assign a veteran teacher to mentor a new teacher for at least two years, and receive a stipend and specialized mentorship training. Mentors would be required to meet with mentees at least once a week in order to discuss district context and policies, instructional practices, professional development, and expectations. Mentors and mentees would be guaranteed release time to facilitate mentoring activities, including classroom observation and coaching.

According to the fiscal note, HB 816 would cost a modest $3 million over the next biennium in order to provide a $250 allotment for each of the 5,800 educators forecast to participate in the program. Bernal suggested the estimate was actually too low, and indicated he anticipates higher participation than the fiscal note assumed.

HB 1255 by state Rep. VanDeaver would remove the $450 cap on subsidized teacher training awarded under the Texas Advanced Placement Incentive Program. VanDeaver stated removing the cap could allow TEA to structure incentives to boost participation in underserved parts of the state. The bill carries a fiscal note indicating a cost of $2.3 million over the biennium. VanDeaver argued the estimate is inaccurate, since the bill would simply grant flexibility to spend existing funding, as opposed to mandating new funding. ATPE supports this bill.

All Monday’s bills were left pending.