The State Board of Education (SBOE) met Wednesday to begin a work session on the schedule for review and revision of the Texas Essential Knowledge and Skills (TEKS), the processes for review and streamlining of the TEKS, and the review and adoption cycle for instructional materials aligned to revised TEKS. 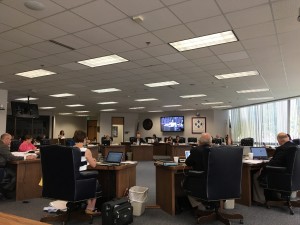 Staff began by outlining a new TEKS review process. The current process can be viewed on the TEA website. Instead of a separate streamlining process and revision process, the agency proposed combining both into a single process that allows board members the option to decide whether each set of TEKS requires a full revision, revision based on current standards or something else. This would allow the board to set a formal charge stating its intent regarding each TEKS under review. 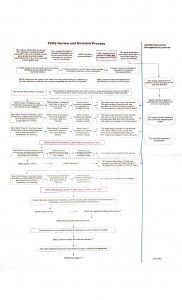 Staff provided a flow chart to illustrate the process, which would begin with TEA collecting information via survey from educators regarding student expectations. This is similar to how TEA began the most recent streamlining of science TEKS. The agency would conduct a briefing or set of briefings for interested stakeholders to allow for earlier feedback. The board would identify content advisors with a minimum of a bachelor’s degree, who have demonstrated expertise in the subject area in which he or she is being appointed, and has either taught or worked in such field. The board discussed appointing up to seven advisors, plus two advisors recommended by the Texas Higher Education Coordinating Board (THECB), for a total of nine. Board members suggested the higher education advisors could be selected from a list of candidates provided by THECB. Content advisors would be involved in the process at many more points than in the current process. The agency would post an open application for work group participants. Instead of a single work group from start to finish, the agency suggested appointing a series of smaller work groups, which would be assigned a certain task over a certain period of time. Work groups would include representation from all SBOE members, and would include educators, parents and business leaders. The work groups would be refreshed over time from a pool of applicants approved by the board, with participants rolled off to be replaced by new participants on a staggered schedule that would replace half the group at a time. Each participant would be able to participate in two face-to-face meetings. Member Barbara Cargill (R-The Woodlands) noted that roughly 500 educators applied to review the English Language Arts and Reading (ELAR) TEKS, and many had to be turned down because of the limited number of work group positions. Board chair Donna Bahorich (R-Houston) said the new process would allow for many more participants over the life cycle of the TEKS review. Work products would be updated to the TEA website after each work group cycle. Staff said this will result in more documents made available to the public, which will provide more opportunities to track the process and offer feedback. Staff suggested moving the public hearings to the discussion and first reading meetings, which would be earlier in the process, in the hopes of encouraging public feedback sooner and reducing the amount of amendments later in the process. Content advisors would review public comments during the 30-day public comment period and present recommendations to the board. The goal is to eliminate meetings that stretch late into the night, resulting in members feeling rushed to vote on language they may not have fully digested. The board indicated that in the event a board member misses a deadline to approve or reject work group applicants from his or her district, the staff may draw upon applicants as though they’ve been approved. The board also indicated it is favorable to continuing to pay content advisors a $2,000 stipend and reimburse them for travel. “This is a big deal. This is a big change,” Bahorich said, recognizing staff for their work in compiling framework for the new process. The board approved the changes at the end of Wednesday’s meeting.

The board also discussed the TEKS review schedule. Because of the large number of career and technical education (CTE) courses, staff recommended the board consider CTE on its own cycle, taking up one to three career clusters at a time. Since instructional materials for social studies are not currently in danger of aging out, staff recommended the board simply streamline the social studies TEKS beginning in the fall and postpone a full revision to 2023. This would enable the board to tackle a more pressing need to revise the science TEKS. After breaking for lunch, the board reviewed development of TEKS for new high school courses. Development has been completed for courses on personal financial literacy, CTE personal financial literacy, computer programming languages, applied Algebra II, non-AP statistics, financial accounting, DC circuits and digital fundamentals. The board recommended expediting the development of TEKS for courses on interaction with law enforcement and cybersecurity, which were mandated by legislation passed by the 85th Texas Legislature. Staff estimated both could be completed in 2018.

The board approved a priority list of pending courses scheduled for development, including non-AP calculus and Mexican-American studies scheduled for 2019, and comparative literature and world geography/world history for 2020. The board had initially expressed uncertainty over whether to develop TEKS for a course on Mexican-American studies, which is one of several currently approved innovative courses. Innovative courses can be offered by districts without the need for new TEKS. There must be TEKS before textbooks are solicited through the proclamation process, since new textbooks are judged against the TEKS for each specific course.

Finally, the board elected members Marty Rowley (R-Amarillo), Tom Maynard (R-Florence), and Georgina Cecilia Perez (D-El Paso) to join member Cargill and chair Bahorich on the Long-Range Plan Steering Committee. The first meeting of the steering committee will be immediately prior to the board’s September meeting. Subsequent meetings will go into “deep dives” on education issues. The committee will draft priorities, then draft strategies for those priorities. The committee will then compile a full report which will be submitted to the board. The 18-member committee will also include one appointee each from TEA, THECB, and the Texas Workforce Commission (TWC), and ten members of the public. Shortly after Friday’s SBOE meeting, TEA will post a Long-Range Plan Steering Committee application similar to those used for TEKS work groups, which will be active through July. Board members not on the committee will each nominate three people from the applicant pool to serve on the committee. Of those 30, the five SBOE members on the committee will choose the final ten nominees to join them on the committee, as well as alternates.