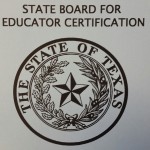 The State Board for Education Certification (SBEC) is meeting today in Austin to take up an agenda involving a few actions items and several discussions. The topic of Districts of Innovation (DOIs) has also made several appearances at today’s meeting.

Action Items
The action items for today's meeting included preliminary action on new passing standards for out-of-country certification candidates required to show evidence of English language proficiency via the Test of English as a Foreign Language (TOEFL). A committee of stakeholders proposed minimum cut scores of 24 for the speaking portion of the exam, 25 on the reading, 25 on the listening, and 21 on the writing. The board also took a preliminary step to disallow out-of-country candidates to show English language proficiency solely based on the fact that they earned a degree from an institution of higher education that delivers instruction in English. The board also took final action on revisions to late renewal requirements for certificate holders. The new language clarifies processes for certification renewals that are submitted not more than six months after the renewal deadline and those submitted more than six months after the deadline.

Discussion Items
The discussion items before the board today included an update on work to redesign the principal and teacher surveys for the Accountability System for Educator Preparation Programs (ASEP); a presentation on the plan to implement the recent changes to rule chapters involving educator preparation programs and their candidates; and an initial discussion regarding future extensive changes to the Standard School Counselor Certificate requirements and standards, as well as additional changes to the Standard Educational Diagnostician Certificate.

The board also received an update on the SBEC directive to explore best pathways for training early childhood through grade 3 teachers. Texas Education Agency (TEA) staff updated the board on the decision by the 85th Texas Legislature to pass legislation mandating the creation of an Early Childhood through Grade 3 Certificate. Staff expanded the discussion to include an educator certification structure redesign to best accommodate new certificate and district needs. The board approved a Classroom Teacher Standards Advisory Committee, which includes ATPE members, to immediately begin work on addressing this charge.

Districts of Innovation
The topic of Districts of Innovation (DOI) also came up several times at today’s meeting. First, in relation to approving the rule review process for the SBEC chapter involving school personnel assignments, TEA staff presented data on district’s certification exemptions under DOI. To date, 416 Texas districts across the state have exempted themselves from certification requirements. Examples of district reasons for certification exemptions shared by TEA included the desire to hire trade professionals to teach CTE courses (an area where state law already grants considerable flexibility to districts); the flexibility to allow teachers to teach outside their field of certification; the intent to hire community college instructors and university professors; and the need to fill science, math and foreign language classrooms in rural areas of the state. The data presented also showed that 127 districts have exempted themselves from the requirement to notify parents of a student who is taught by an uncertified teacher, and 12 DOIs will not follow state law requiring districts to void the contract of a probationary educator who fails to complete all certification requirements in the three years the candidate is given to do so.

Later, TEA attorneys also explained to members of the board how it is possible for DOIs to hire educators who previously had their SBEC certificates revoked  - even permanently - because state law fails to prevent such conduct, despite specific provisions in place for charter schools given similar flexibility.