The latest on the misguided fight over educators' payroll deduction

As ATPE has been reporting on Teach the Vote and atpe.org, two bills have been filed this session aimed at preventing educators from using payroll deduction for their association dues. They are House Bill 510 by Rep. Sarah Davis (R-Houston) and Senate Bill 13 by Sen. Joan Huffman (R-Houston). The legislation to ban payroll deduction has been declared a legislative priority by Lt. Gov. Dan Patrick (R).

Dubbed an effort to keep the government from collecting "union dues," these politically motivated bills actually have a greater impact on non-union professional entities such as ATPE. That's why saving payroll deduction while educating lawmakers about the ugly political motives behind these bills is an ATPE legislative priority for 2017.

ATPE members should be familiar by now with the national movement to ban the use of payroll deduction by public employees. A controversial bill to keep school employees from using payroll deduction for their association dues, while allowing police, fire, and EMS workers to continue to payroll deduct their union dues, passed the Texas Senate in 2015 but never made it out of a House committee. This week, that same committee – the House Committee on State Affairs –shared its 2016 interim report, which includes a section on "union dues."

It's an issue the committee was tasked with studying as an interim charge last year. The report notes that when the House State Affairs committee held a hearing on that bill last session, "Over 200 witnesses registered," but only "17 were in support of the legislation." The supporters of the 2015 bill included the same business groups who were invited to submit comments on the interim charge. 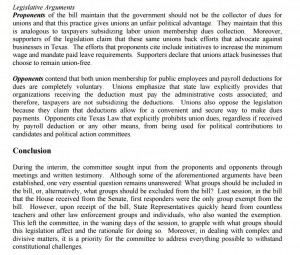 The House committee's interim report summarizes arguments both for and against proposed legislation to ban payroll deduction, with supporters likening it to a taxpayer-funded "unfair political advantage" given to labor unions "that advocate against business in Texas" and "attack businesses that choose to remain union-free." The report sums up arguments against the bills, including the facts that there is no cost to taxpayers since unions can be charged a fee for any dues collection-related costs and dues cannot be used for political contributions. The committee report concludes by acknowledging concerns about constitutionality of the legislation and notes that "one very essential question remains unanswered: What groups should be included in the bill, or, alternatively, what groups should be excluded from the bill?"

Knowing that a bill to ban payroll deductions would again be filed for consideration in 2017, the House State Affairs Committee's ultimate recommendation on this interim charge was as follows: "The legislature should seek input about the policy rationale from both sides of the debate regarding the need for the law change and most importantly, what groups the bill should address."

Clearly, the 85th legislature needs to hear from educators on why there is no actual need to change this law and no valid argument for taking away school employees' right to use payroll deductions from their own wages as they choose. ATPE members should explain to lawmakers why these bills are unnecessary, especially since no taxpayers dollars have ever been at risk as a result of the payroll deduction laws. Educators are also urged to ask their legislators why public school employees are the ones being targeted by these bills. If the proponents of these bills are truly concerned about unions that "attack businesses" and send their dues out of state to fund "anti-business policy campaigns," as suggested by NFIB-TX in written testimony, then it makes no sense for them to pursue bills like SB 13 and HB 510 that punish groups such as ATPE, an organization not affiliated with any national union and a longtime supporter of right-to-work laws.

ATPE members can log onto our website and use our tools at Advocacy Central to send quick messages to their legislators about this and other issues. We encourage you to call or write your legislators now, before these bills are on the move, and ask them to oppose this unnecessary legislation intended to silence the voices of the public education community. Let them know the facts behind payroll deduction and the people who would be affected by these bills if passed. If your representative or senator is one of the authors or co-authors supporting these bills, they still need to hear from you and understand that there are many voters who oppose the unfairly written SB 13 and HB 510.

Too often, the legislature makes decisions about public education based on input from non-educators. This could easily become another example of education laws and policies being steered by special interests outside of our school community because educators aren't speaking up. And in this instance, if educators don't speak up and oppose the ban on payroll deduction, their voices will carry far less weight in the future.
Previous
Next