Here's this week's wrap-up of education news from the ATPE lobbyists: 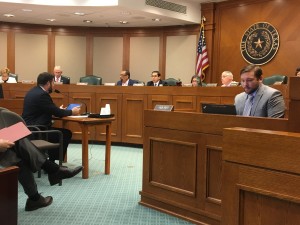 ATPE Lobbyist Monty Exter testifying before the House Public Education Committee, April 27, 2017. The House Committee on Public Education worked overnight and into the early hours this Friday morning hearing testimony on bills, including some aimed at funding private school voucher programs. Imminent end-of-session deadlines combined with a lengthy, high-profile floor debate this week on sanctuary cities resulted in late night hearings on many education bills. ATPE Lobbyist Mark Wiggins provided a comprehensive blog update on the Thursday proceedings at which the committee voted on 15 bills previously heard and took testimony on 26 additional bills. Bills heard by the committee overnight included a version of the "Tim Tebow" bill to allow home-schooled students to participate in UIL activities, plus a pair of bills by Rep. Ron Simmons (R-Carrollton) aimed at using public education dollars to help students qualifying for special education receive private education or therapies. ATPE Lobbyist Monty Exter provided testimony on both bills, suggesting alternative ways to help ensure that students with special needs have access to appropriate services while maintaining accountability and the integrity of the public school system. 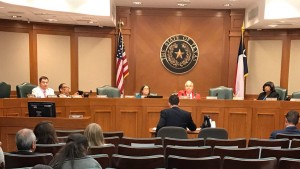 ATPE Lobbyist Mark Wiggins testifying before the House Public Education Committee, April 25, 2017. With end-of-session deadlines looming, the House Public Education Committee packed in hearings of numerous bills this week. ATPE Lobbyist Mark Wiggins reported on the committee's Tuesday meetings, which included discussions of Districts of Innovation and scheduling the school year, always a controversial subject. The committee also heard HB 1333 by Rep. Jason Isaac (R-Dripping Springs), aimed partially at reducing standardized testing in Texas. For more on the committee's conversation about testing, read this piece by The Texas Tribune republished here on our blog, which also refers to testimony given by ATPE Lobbyist Monty Exter. ATPE's Wiggins also testified in support of funding for high-quality pre-K programs during Tuesday's hearing. The House Public Education Committee also met briefly on Monday to take votes on additional bills heard earlier this session. As reported by ATPE's Mark Wiggins, the committee approved bills to eliminate state tests for writing and social studies, allow children of military families to enroll full-time in the state's virtual school network, and provide mentoring and professional development for new teachers. In a rare move, committee members also voted against a bill dealing with charter school liability and zoning laws. The committee will meet again Tuesday, May 2, with another lengthy agenda of bills hoping to survive the May 8 deadline for House committees to favorably report out any House bills that may still be eligible for floor debate. 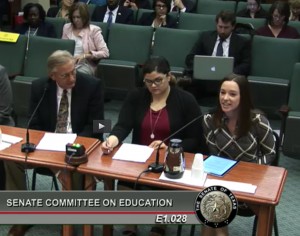 ATPE Lobbyist Kate Kuhlmann testifying before the Senate Education Committee, April 27, 2017. Over in the Texas Senate, proposals to change the state's beleaguered "A through F" accountability system were in the spotlight. As ATPE Lobbyist Kate Kuhlmann reported yesterday on our blog, the Senate Education Committee heard bills this week by Chairman Larry Taylor (R-Friendswood) and Sen. Charles Perry (R-Lubbock), both aimed at redesigning the state accountability system to incorporate different indicators and calculations. Testifying on ATPE's behalf, Kuhlmann urged the committee to consider integrating measures associated with teacher quality into the system but cautioned against the over-reliance on student test score data. Taylor's SB 2051 and Perry's SB 1173 were both left pending. Also testifying before the Senate Education Committee was Commissioner of Education Mike Morath, who used the opportunity to promote the Texas Education Agency's new Confidential Student Report (CSR). The revamped reporting tool for parents was rolled out by TEA this week. Morath and will soon be linked to a new CSR website with additional resources related to STAAR testing. Meanwhile, the Texas House is preparing to debate another major bill dealing with A-F on the House floor next week. HB 22 by House Public Education Committee Chairman Dan Huberty (R-Kingwood) was approved by that committee on April 4, and is now scheduled on the House calendar for floor debate on Wednesday, May 3. Stay tuned to Teach the Vote for updates next week.   Yesterday, the Texas House approved a gradual phase-out of the business margins or franchise tax that generates revenue for public education. HB 28 by Rep. Dennis Bonnen (R-Angleton) passed the House on a 96-39 vote mostly along party lines. The bill would target the unpopular business tax for gradual elimination starting in 2019. For more on the bill, read this week's coverage by The Texas Tribune. The measure will head next to the Senate for consideration, but even if it passes, it has no direct bearing on the budget currently being considered by the legislature the next two years.

A conference committee appointed by both chambers to iron out differences in the House and Senate budget plans for SB 1 began its meetings earlier this week. ATPE encourages educators to contact members of the conference committee and urge them to send a budget compromise that adequately accommodates public education needs to the full legislature for swift approval. ATPE members can visit Advocacy Central to send messages to their lawmakers.

Stakeholders in the Teacher Retirement System (TRS) have a few more days left to cast a ballot for one of two open seats on the TRS Board of Trustees. Active members of TRS are invited to vote on a new at-large seat to be appointed by Gov. Greg Abbott based on the three highest vote-earners. Retired TRS members may vote on the at-large position, as well as a retiree position on the board. Voting closes on Friday, May 5, 2017. Learn more on the TRS website here.
Previous
Next