State Board of Education takes up science, language arts TEKS

The State Board of Education is meeting this week while the Texas Legislature is session. Across the street from the Capitol inside the Texas Education Agency (TEA) building, the board began its week-long meeting Tuesday morning with public testimony on proposed changes to the science TEKS. 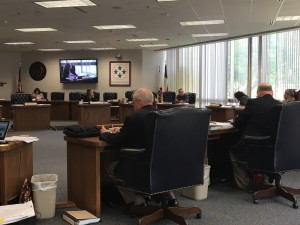 State Board of Education April 2017 meeting. Some creationism supporters took issue with the changes proposed after first reading earlier this year. Biology teachers on the curriculum writing committee have proposed changes they explained would streamline the TEKS and focus on grade-level appropriate discussion. Creationism supporters argued Tuesday that the changes watered down criticism of evolution, and asked the board to retain proposed language to require students to “evaluate” various subjects related to evolution. Physics and chemistry teachers also recommended more mundane tweaks to their respective TEKS. Wednesday began with an update from TEA Commissioner Mike Morath. The commissioner informed the board of upcoming changes to the STAAR confidential student report card (CSR), aimed to make the report more parent-friendly and easy to understand. The report will now contain student lexile levels for the current year and over a student’s academic history. The report will include information for parents regarding how to help improve a child’s reading level, as well as guidance regarding how to maximize the impact of parent-teacher conferences. The agency has also changed terminology to replace the terms for Level I through Level III standards with “does not meet grade level,” “approaching grade level,” “meets grade level,” and “masters grade level.” These changes have already been adopted in rule and will be reflected in report cards due out in June. Commissioner Morath also announced TEA is readying a new website that will allow parents to see every STAAR question their student was asked, along with what they answered and what other students answered, compared to the correct answer. This website is expected to roll out in mid- to late June. The agency is also working on a separate site for teachers and administrators. The separate website would help teachers and administrators unpack and understand the streamlined English Language Arts and Reading (ELAR) TEKS. The site will feature sample assessment questions and is intended to help teachers understand vertical and horizontal alignment of curriculum standards, as well as distinguish the meaning of verbs used in the TEKS insofar as how they affect instruction. The agency plans to activate the site in advance of the school year in which the TEKS are scheduled to go into effect. The commissioner responded to questions from the board regarding the rollout of the “A through F” accountability standards passed by the Texas Legislature last session. House Bill 22, which would pare down the five domains to three and eliminate the overall grade, has passed out of the House Public Education Committee this session and is expected to be up for debate on the House floor within the next two to three weeks. At this point, Morath indicated he has participated in at least 70 stakeholder meetings regarding rulemaking for the version of A through F currently undergoing implementation. Some changes have been suggested to specific components, such as the calculation of chronic absenteeism at the elementary level and adjustments for children of military families and those who are absent due to illness. As far as legislative priorities, both the House and Senate budget proposals include $25 million requested by the agency to access matching funds for rural broadband internet. Other priorities for which TEA is seeking funding in either one or both chambers include math innovation zones, high-quality pre-K, additional staff to investigate inappropriate student-teacher relationships, IT support for the Texas Student Data System (TSDS) to facilitate additional automation, cybersecurity enhancements to safeguard student data and funding to allow the STAAR test to be released annually as opposed to every three years. On Wednesday, the board resumed discussion on second reading of the science TEKS. After hearing testimony the day before, the board unanimously adopted an amendment adding compromise language to a key section of the biology TEKS dealing with evolution. The amendment changed “evaluate” to “examine” scientific explanations for the origin of DNA. The board also adopted an amendment that would delay implementation of the streamlined science TEKS to the beginning of the 2018-19 school year. The board completed discussion of English and Spanish Language Arts and Reading TEKS for elementary and middle school Wednesday evening, approving amendments on second reading before adjourning. Breaking up into committees Thursday morning, the board's committee on School Finance and the Permanent School Fund (PSF) heard an update to the bond guarantee program (BGP). As of February 28, roughly $70 billion of the program’s $100 billion capacity had been allocated. After setting aside $5 billion as required, roughly $24 billion remained available to back school bonds with the PSF. Last year, the board voted to increase the multiplier used to calculate the amount available to charter schools, which resulted in increasing that amount from $165 million to $510 million. Committee chair David Bradley (R-Beaumont) questioned staff regarding HB 3438 by state Rep. Linda Koop (R-Dallas), which would use the PSF to guarantee school lease-purchase agreements through the Texas Public Finance Authority (TPFA). Staff advised that current law likely allows for the PSF to be encumbered to guarantee short-term commercial debt, and debt under this program would likely be cumbersome on the TPFA. The bill was voted out of the House Public Education Committee during a formal hearing Thursday afternoon at the Texas Capitol. After Thursday's committee meetings, SBOE's committee of the full board gathered to take up discussion of the English and Spanish Language Arts and English as a Second Language TEKS for high school on first reading.