From The Texas Tribune: Eleven Texas school boards ordered to the classroom 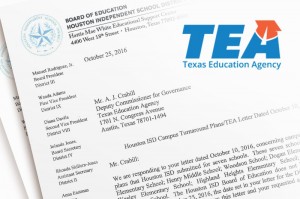 The superintendents and elected school boards of 11 Texas districts — including Dallas, Houston and Fort Worth — have been ordered by the state education agency to attend two-day training programs to learn how to fix their failing schools.

Deputy Commissioner of Education A.J. Crabill sent letters to the 11 school boards Oct. 10 saying they need additional governance training because their districts submitted unsatisfactory plans for turning around floundering campuses. All 11 superintendents and boards have agreed to the training, with several members expressing frustration about what they saw as an unfair and vague request.

The letters were sent about two months after TEA released 2016 accountability ratings showing that 467 campuses statewide — including 42 in the targeted districts — were labeled “improvement required,” a decrease from 603 campuses last year. The notices were sent to Brazosport, Corpus Christi, Dallas, Fort Worth, Hearne, Houston, Lubbock, Midland, Nacogdoches, Tyler and Waco.

Texas Education Commissioner Mike Morath has promised to crack down on low-performing schools and to halve the number of failing schools over the next five years.

State law requires districts to submit detailed plans in the spring to fix problems at schools labeled “improvement required” for two or more consecutive years. The districts are supposed to include parents and the community in drafting the proposed fixes.

Morath has the final say on approving the plans — by mid-to -late June, according to a TEA timeline — so districts can start implementing them the following school year.

But for the 11 school districts, that implementation will have to wait until board trustees and superintendents attend a two-day, 24-hour governance training session.

In the letters, Crabill said he wasn't sure the plans the districts submitted would address problems — including low test scores, low graduation rates, high dropout rates, and poor college readiness — within two years. The training sessions will help trustees identify and fix weaknesses in their plans, the letter said.

If Morath decides not to approve a plan, he can replace the board of trustees, replace the principal of a school or shut the school down completely, Crabill wrote.

Houston Independent School District’s board of trustees told Crabill it will likely vote to attend the training. But it also admonished the agency for leaving little time to actually turn around its schools. The commissioner said he would respond to the plans in June, and now may not approve them until trainings are completed in December.

“Our ability to make significant changes to the plans for these seven schools at this date may be somewhat limited,” the Houston board wrote Oct. 25. “Since TEA has missed its own published deadline for responding to the turnaround plans by four months, we ask that you provide us with specific concerns that TEA may have with the plans for these seven schools, so that we may begin considering how to make any appropriate adjustments in a way that will cause the least disruption during the school year.”

At an Oct. 27 Dallas Independent School District board meeting, a few trustees said the request for training was too vague.

The commissioner did approve campus turnaround plans in other districts around the state, TEA spokesperson Lauren Callahan said. She could not say what the difference was between those plans and the ones the commissioner flagged.

After receiving a flood of questions from district officials across the state, Crabill included a few key explanations in a follow up email to all 11 superintendents. He slashed the training from four days to two, after trustees said it was too hard for them to fit into their schedules. He presented six different dates and locations for the training, in Kilgore, Waco, Fort Worth, Midland, El Paso and Houston, on weekdays and weekends between Nov. 9 and Dec. 17.

All trustees and superintendents from all 11 boards must attend the entire workshop, Crabill said.

“This is a team event so just like in other team events, the whole team has to win together. Completion means that all trustees and the superintendent were present at the same workshop for the entirety of the workshop,” Crabill wrote.

Though all 11 boards have agreed to attend the training, it is not clear whether all trustees will show up.

A veteran Lubbock board trustee said he voted yes to the resolution agreeing to training – but now he’s not sure whether he will actually attend. He called the demand for governance training “unprecedented” in his 14 years on the board.

He said he is not sure whether he can get away from his day job for two 12-hour days. Districts have to cover the cost of any travel required for board members to attend the training session.

TEA does not have a plan in place in case board members don't show up, Callahan said. “So far, TEA is receiving confirmation that board members will attend and complete the training. As a result, discussions on failure to participate have not been necessary,” she wrote in a statement Tuesday. “Any talk of penalties is premature."

Read related Tribune coverage here:
This article originally appeared in The Texas Tribune at https://www.texastribune.org/2016/11/02/tea-demands-district-training-delays-turnarounds/.
Next