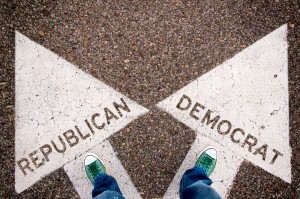 The Democratic and Republican national conventions came to a close last night as Democrats finished their final night of convention business. (Republicans conducted their convention last week.) The majority of the convention media coverage was focused on the fanfare of speeches and the official nomination processes, but another, less-publicized piece of business each party conducts during their convention also took place: the development and approval of party platforms. Party platforms represent the respective parties' official stance and policy goals on public policy issues. The platform is used to express the opinions of a party and party members in an effort to garner support and votes from the voting public. Education is among the topics addressed in party platforms, and this year’s approved platforms represent two drastically different takes on public education. We break them down for you below. Democratic Party Platform on Public Education Democrats “believe that a strong public education system is an anchor of our democracy, a propeller of the economy, and the vehicle through which we help all children achieve their dreams.” Democrats intend to make prekindergarten a priority by investing in programs like Early Head Start, creating access to high-quality childcare and preschool, raising wages for childcare workers, and ensuring kids and families have access to experienced and high-quality early childhood educators. Democrats support school support services like after-school programs, summer learning programs, and group mentoring programs for students. They will also invest in STEAM classes, community schools, computer science, the arts, and career pathways. Democrats will focus on providing high academic standards and raising academic achievement for all students, particularly low-income students, students of color, English Language Learners, and students with disabilities. They want to fully fund the Individuals with Disabilities Education Act (IDEA). Democrats will work to “strike a better balance on testing so that it informs, but does not drive, instruction.” They want states to develop a multiple measure assessment system made of reliable and valid assessments that do not falsely and unfairly label student populations and that is not used as a gauge for school funding or closings. They will end the “test-and-punish version of accountability.” Democrats oppose using student standardized test scores in educator evaluations. Democrats will support educators with tools and professional development, safe and collaborative school environments, and “a national campaign to recruit and retain high-quality teachers.” Democrats will oppose discipline policies that disproportionately affect minority student populations, students with disabilities, and LGBT students. They will support restorative justice practices and work to improve school culture and bullying. Democrats are committed to eliminating opportunity gaps through efforts like creating laws that ensure parents in poverty have time to spend time with their children, raising household incomes for low-income families, creating access to health care for needy families, enriching early childhood education for all kids, and supporting equitable and adequate state school funding. Democrats support “democratically governed, great neighborhood public schools and high-quality public charter schools,” believing such charter schools should not replace or undermine traditional public schools. They want charter schools to accept and retain student populations representative of the communities they serve and be held to high transparency and accountability standards. View the full Democratic Party Platform here. Republican Party Platform on Public Education Republicans “reject a one-size-fits-all approach to education and support a broad range of choices for parents and children at the state and local level.” They believe that “parents are a child’s first and foremost educators, and have primary responsibility for the education of their children.” Republicans support a constitutional amendment to protect parents’ rights to direct the education of their child without the intervention of states, the federal government, or international bodies. Republicans oppose the required use of national standards and assessments, like Common Core, and they praise states, parents, and educators who implement alternatives. Republicans support “choice-based, parent-driven accountability at every stage of schooling,” which they believe “affirms higher expectations for all students and rejects the crippling bigotry of low expectations.” Republicans reject excessive testing and "teaching to the test." They support strong assessments that offer teachers a tool to tailor instruction. Republicans believe educators should be responsible for and freed from lawsuits involving reasonable efforts at discipline in the classroom. They believe administrators and districts should be able to hold educators accountable for student performance, should institute merit-based systems, and should attract teachers from business, STEM, and military backgrounds. They believe school personnel should pass background checks and meet high standards of conduct. Republicans support instruction in STEM subjects and phonics, career and technical education, American history and civics “by using the original documents of our founding fathers,” abstinence education over family planning programs, and the Bible in a literature curriculum as an elective. They also support the use of technology, which they believe is an essential learning tool that creates access and opportunity for all children, and the English First approach. Republicans note what they consider to be high federal funding on public education and assert that it has resulted in “little substantial improvement in academic achievement or high school graduation rates." They support block grants, transparency on unfunded mandates, and a concept referred to as "Title-I portability," where Title-I federal funding would follow a child to the public or private school of the family's choosing. Republicans support school choice and privatization. They believe choice is the “the most important driving force for renewing education” and “especially support the innovative financing mechanisms," such as vouchers, education savings accounts (ESAs), and tuition tax credits. They also highlight support for choice options such as “home-schooling, career and technical education, private or parochial schools, magnet schools, charter schools, online learning, and early-college high schools.” Republicans believe the federal guidance allowing transgender students to use the facilities that match their gender identity is illegal, dangerous, and without concern for student privacy. View the full Republican Party Platform here.