This morning, after a fairly brief and largely bipartisan markup where lawmakers considered a handful of amendments, the U.S. House and Senate joint conference committee tasked with negotiating language to reauthorize the Elementary and Secondary Education Act (ESEA) overwhelmingly passed its conference report (or negotiated bill). While the report has not yet been released in its entirety, an "ESEA Conference Framework Summary" was released and summarizes the report's content in major policy areas such as accountability, testing, standards, intervention, and educator support. The majority of the report was agreed upon by the chambers' respective education leaders (House Chairman John Kline, R-MN, and Ranking Member Robert Scott, D-VA, and Senate Chairman Lamar Alexander, R-TN, and Ranking Member Patty Murray, D-WA) who negotiated a "framework" prior to beginning the conference committee work. 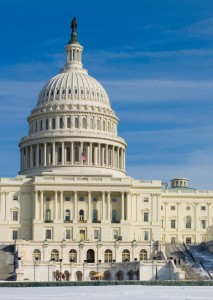 A handful of amendments were discussed at today's markup prior to passing the bill. Seven easily passed with bipartisan support, one was withdrawn by its author, and only two were voted down. The amendments that passed would authorize a study to examine changes to formula funding through Title I, review early childhood education programs, establish limits on aggregate time spent on assessments, provide funding for educating teachers on the appropriate use of student data, provide for dual or concurrent enrollment for English language learners, integrate arts in STEM education, and offer funding flexibility to carry out dropout prevention and re-entry programs.The two amendments not adopted by the committee would have created a clearinghouse for teacher evaluation programs and put a cap on funding at the funding level for fiscal year 2016, respectively. The report was ultimately passed out of the conference committee overwhelmingly by a vote of 39-1. Senator Rand Paul (R-KY), who is currently campaigning for the presidency, was the only member of the committee to vote against the measure, and he did so by proxy as he was not in attendance. Chairman Kline said at the close of today's meeting that the full report in legislative text form will be available Nov. 30 and that the House will vote on the measure Dec. 2 or 3. Senate leaders did not give a precise date for a floor vote in that chamber, but Chairman Alexander said senators will be given at least a week to consider the report prior to voting.