In Washington, ATPE advocates for ESEA and Social Security relief

A group of ATPE state officers and staff are in Washington, D.C. this week for meetings to discuss education policy matters at the national level. ATPE’s Executive Director Gary Godsey, Governmental Relations Director Brock Gregg, State President Richard Wiggins, and State Vice-President Cory Colby have been liaising with several members of Congress and their staffs, along with representatives of the executive branch. ATPE’s Washington-based contract lobby team, led by David Pore, coordinated the meetings. 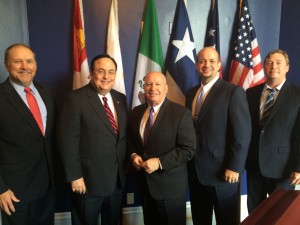 Gary Godsey, Richard Wiggins, Congressman Kevin Brady, Cory Colby, and Brock Gregg On Tuesday, the ATPE delegation met with Congressman Kevin Brady (R-Texas) to discuss Social Security legislation. Educators have long been penalized by a federal offset known as the Windfall Elimination Provision (WEP) that reduces the amount of Social Security benefits some government workers may receive when they retire. ATPE has advocated for repealing the controversial WEP, but because of the extremely high cost associated with full repeal of the law, we have also proposed that Congress take more gradual steps, both to make the WEP’s application of benefits fairer and to increase benefits when possible. ATPE and the Texas Retired Teachers Association have worked closely with Congressman Brady over several years to pursue a viable solution that would result in increased benefits for retired educators. As we reported on Teach the Vote earlier this year, Congressman Brady has filed H.R. 711, the “Equal Treatment for Public Servants Act,” to provide educators with some relief from the WEP. Brady’s bill, co-authored by Congressman Richard Neal (D-Massachusetts), would replace the WEP’s arbitrary and punitive offset formula with a revised calculation of benefits and result in a significant benefit increase for numerous retirees. ATPE's discussions with the Texas Congressional delegation and their staffs this week have also focused on plans to reauthorize the long-overdue Elementary and Secondary Education Act (ESEA), more commonly known as No Child Left Behind (NCLB). The ATPE team also visited the U.S. Department of Education (DOE) this week to talk about Texas's pending request for an extension of our state's ESEA waiver, which helps schools avoid being penalized by outdated provisions in the federal law, such as the requirement for Adequate Yearly Progress (AYP) and restrictions on how federal funds must be spent. 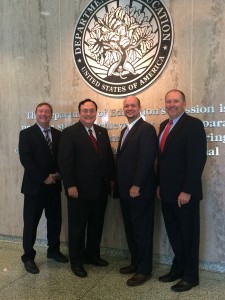 Gregg, Wiggins, Colby, and Godsey at the U.S. Department of Education ATPE's Brock Gregg reports that the group met with Monique Chism, Director of the Office of State Support, and the DOE's Texas waiver team on Tuesday. The discussions covered all aspects of T-TESS, the new evaluation system for teachers and principals that the Texas Education Agency (TEA) has proposed in fulfillment of conditions attached to the original ESEA waiver that the federal government granted to Texas. The DOE agreed to postpone its review of our state's request to extend the waiver until after the 84th Texas Legislature adjourned its session earlier this month, and those negotiations with TEA have now resumed. In this week's meeting, ATPE State President Richard Wiggins was able to provide federal officials with detailed insights on the proposed new evaluation system after having served on the stakeholder committee that made recommendations to TEA on how it should design T-TESS. DOE officials explained that the main point of contention with Texas's plans for teacher evaluation is not the design of the new T-TESS instrument, but rather the fact that state law does not require school districts to use the state-recommended evaluation system. ATPE's officers and staff impressed upon DOE officials the importance of allowing school districts across such a large, diverse state to have flexibility to adopt appraisal systems that will meet their local needs rather than a standardized, one-size-fits-all approach. "Teachers really want a meaningful evaluation system that helps them grow as professionals," Gregg explained. According to Gregg, the DOE officials did not reveal any clues as to their timeline for making a decision on Texas's outstanding waiver request. If the request is denied, Texas schools will once again be subject to the original accountability provisions of ESEA, including its antiquated and highly flawed requirement that all students achieve "proficiency" by 2014. Without continuation of the waiver, nearly all Texas schools would be unable to meet such an unrealistic "proficiency" standard, would be considered low-performing under federal law, and would face harsh sanctions as a result. Gregg added, "This law has become arbitrary and capricious for schools all over the nation due to congressional gridlock and complete ineptitude for the last 13 years." Fortunately, both the U.S. House and Senate have ESEA re-authorization bills on the move. We could see floor action in the Senate as early as next week, and the House expects to get to its version in July. "Once the law is reauthorized," said Gregg, "there will be no reason for states to seek waivers, so we are hopeful that Congress will pass this legislation before the next school year."