By KATE GROETZINGER & KATE MCGEE NOV. 1, 2016 Austin ISD Superintendent Paul Cruz chatted with six Reagan Early College High School students as they gathered at the ACC Highland Mall campus' early voting center on Monday afternoon to cast their ballots on their way to class. The students are among 1,963 young adults in AISD schools that are age 18 or older this month. “I can say that it’s important to vote, and people are going to say 'That’s an old guy, right?'" Cruz said to the students. “But, if they hear you saying it, I think it’s a different message. Don’t you think?” The students, who take classes at ACC through their high school, recorded a video with Cruz while standing outside the polling place to encourage other students their age to go to the polls. The video is part of a concerted effort Cruz’s office has made this fall to educate students at AISD schools about the importance of exercising their right to vote. The superintendent’s office plans to share the video on the AISD Twitter account and Facebook page to reach students in a new way. “In all of our high schools, we have individuals who help students and families understand about voting. It’s something we’ve done for many years,” Cruz said. “This is to use different mediums that students are used to now. It’s just another approach to get the word out.” Reagan Early College High School Academic Director, Jesse De La Huerta, says many students find the voting process intimidating “Every time I talk to students who are becoming of-age to vote, it’s scary. They’re like, ‘What if I don’t know what to do? What about this? What about that?’” De La Huerta said. Teachers at Reagan quell students’ concerns about voting by answering these questions in government classes at Reagan, De La Huerta says. They enthusiastically accepted the challenge from the superintendent’s office this year to talk more to their students about the importance of voting, he said. 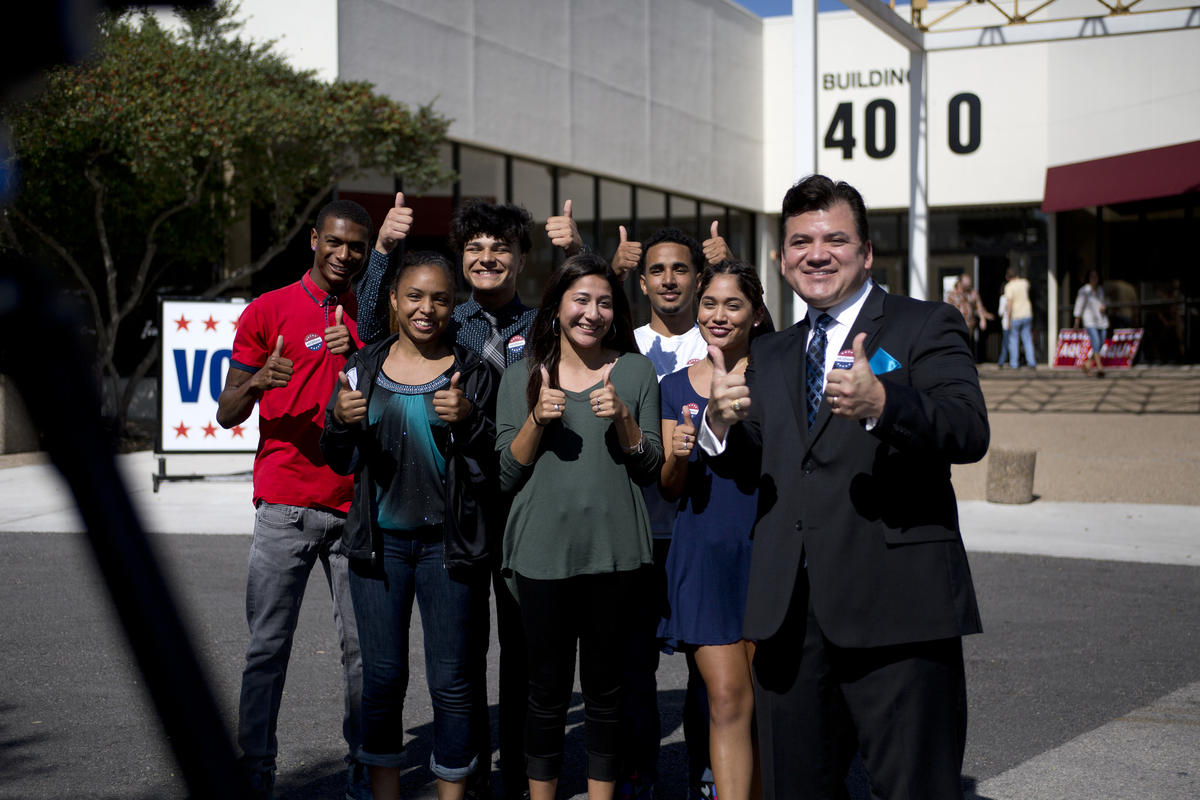 AISD Superintendent Paul Cruz poses with students outside of ACC's Highland Mall campus during an AISD voter awareness event.
CREDIT MIGUEL GUTIERREZ JR. / KUT
But education groups across the state say teachers also need encouragement to vote, and they want school district superintendents to create a culture of voting on campuses – an effort called Texas Educators Vote. “When people vote, they often have an issue in mind and it’s not usually education," said Laura Yeager, the director of Texas Educators Vote. "These are educators who vote and then they often get to school and say, 'Gee, why aren’t they funding our schools?' and 'Why am I only teaching testing?' and 'Why are all these things happening?' And we’re trying to link the issue that’s important to them with their vote.” The group includes the Association of Texas Professional Educators, the Texas Association of School Boards, the Texas Rural Education Association and others. Yeager says she and some others got the idea after the last legislative session. “We were bemoaning how hard it was to get good public education passed, but we had done a pretty good job stopping some bad legislation," she said. The idea, Yeager adds, is to educate teachers and hope that education trickles down to students and other school employees. “We can get them to research and think about who actually supports public education," she said. "Get them educated, and then encourage the culture of voting for students, educators, bus drivers and custodians and, really, everyone working in Texas public schools. Maybe we’d get to elect people that really did support public schools.” The group doesn’t endorse any candidates, but encourages teachers to educate themselves on who is running and their views. They also suggest schools provide incentives to teachers to vote through school-wide contests or mini prizes for those who wear an "I Voted" sticker. “You could go down in history, you could be that person who says later, ‘I voted for the first female,' if that’s the case, or whatever the case may be,” De La Huerta said. Last month, Austin School Board trustees approved a resolution to encourage Texas educators to vote. While this message seems to be inspiring at least some students at Reagan, they may have to do a little digging to figure out how to vote on their own. Celeste Vasquez, one of the students featured in the video, said she used the internet to figure out how to register to vote. “My government teacher talked to me somewhat about the procedure, but mostly about the importance of voting,” she said. “I pretty much learned how to do all the other stuff on my own through websites. I figured out step by step what I needed to do, one step at a time.” This story was produced by KUT in collaboration with the Annette Strauss Institute’s Lebermann Forum. It was originally published by KUT and reprinted with permission. View the original article and listen to audio here.
Previous
Next